I had recently reported about how I reinstalled my Openmediavault NAS servers and equipped them with other hard drives. But then came more wishes 😉 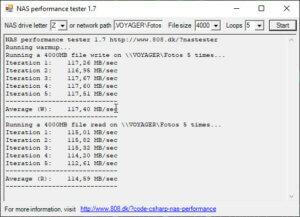 The reinstallation of my NAS had become necessary, because I unfortunately increased the disk space with so called SMR hard disks. But the speed of the NAS drops massively. Partly the data transfer rates were only 1/2 of what you would expect from a GBit network.

Now with the new installation I reach again 115-117 MB/sec. when accessing via Windows, and that is already a pretty good value.

But especially with video recordings quite large files come up quite fast, which are then to be copied to the NAS because of the backup. And there it would be nice to be able to accelerate that. 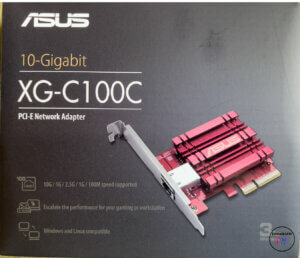 The components, especially network cards, that can do 10GBit are now available for less than 100,– €. And there are also switches, which are at least equipped with 10Bit ports, which are available around 150,– €. However, if you want to integrate more devices into such a network, corresponding switches with a larger number of 10GBit ports are also quickly in the region of 400-500,– €.

On top it depends on the cabling. 10GBit requires at least Cat 6 cables and according to the network sockets even Cat 6a should be here. Nevertheless, I initially decided to connect the NAS via peer-to-peer connection, because I am the only user with photos and videos anyway.

After some research I decided to use the Asus XG-C100C card and even ordered Cat 7 cables for the connection between the computers.

After installation, the card was immediately recognized on Openmediavault and I was able to set it up in the web interface. It seems to be based on a Marvell chip.

Under Windows, however, I had to install the drivers first. There is a CD included, but since I don’t have a CD drive anymore, I had to download the driver.

But since both systems, desktop PC and also NAS remain connected via the 1 GBit network, you have to assign an IP address for each of the 10GBit cards, which is located in a different network. Under Windows it may be necessary to specify the name and IP of the NAS in hosts file, so that e.g. with SMB connections the faster connection is selected. At 10Gbit/sec we are talking about a theortical transfer rate of 1,250 MB/sec. However, this is more than any hard disk allows and even Sata SSDs would be overtaxed with this.

Nevertheless, such results look good, which can reach over 700 MB/second. However, since 4 GB are read here, the transfer rate is probably measured by the RAM.

Even if you now subtract a part as overhead, the transfer rates should still be beyond 900MB/sec and a hard disk and also a SATA SSD is naturally overtaxed with that.

If you now take the above example with e.g. 8 GB then the speed drops rapidly: 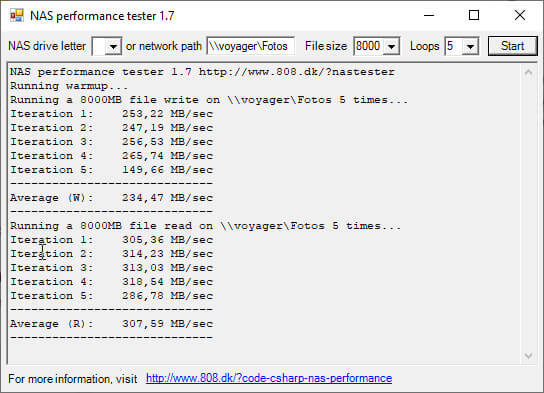 While you have quite constant rates of 115-117 MB/sec in GBit Ethernet because the speed of the disks is still higher, it plays a big role in a 10GB network.

And to whom the read/write speed seems quite low, I can say, yes that’s true.

But more about this in part II