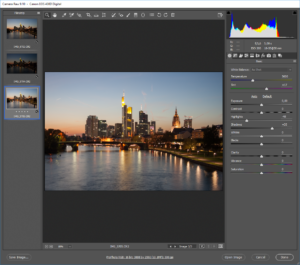 This week we took a look on exposure blending in addition to the regular HDR techniques and tools, which offers the ability to handle a large contrast in the final image. In contrast to render images from an expsoure bracket series with an HDR tool you need more than one image but you’ll use only the needed parts from a single image to generate the final image.

For this technique you need Photoshop CC or any other program capable of handling layers like ON1 Photo RAW or Affinity Photo. This method takes more effort because of masking out the needed parts in every single base image but you avoid the typical HDR look on the final result and probably keep more details in the image because only the needed parts are used for the final image.

The last but one week i reported on the upgrade of my Nextcloud installation, which worked out without any problems. But now i have to face the problem that the Adnroid apps for synching don’t work correctly both on my smartphone and my tablet. Changing a file i’m notified that for example i changed this file like 1 hour ago. Opening this file will open the old version or old image in case of an image file. Even triggering the synch manually a couple of times doesn’t help. There a re problems reported on version 1.4.2 but this discussion didn’t help me because meanwhile version 1.4.3 was released and even installing the development version from f-doid didn’ t help so far.

It’s vacation time but maybe the app developers could solve this problem very fast because i wouldn’t be happy to go back to DropBox again.

And now there is something for free again 😉  Corel makes an offer a giveaway for Aftershot 3.  Aftershot 3 Pro was reviewed in my blog post and i wasn’t thrilled about this program and the version in the giveaway isn’t the pro version. But the pro version is offered for arround 60,– € so maybe thats interesting for somebody.