The Galaxy S6 is Samsung top notch smartphone besides the S6 edge, and maybe you only debate about the pro and cons compared to a iphone6. In this article i’m talking about my experiences. 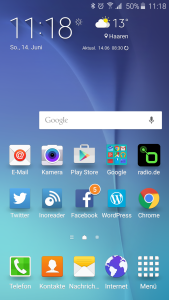 My Galaxy SIII has been arround for quite a while, but lately it was getting slower and slower, maybe because new apps need more and more memory.

In addition the smartphone’s rechargeable battery woudln’t last a whole day, so i had to order a battery with almost double the capacity of the original battery.

So over the last month there was a strong wish for a new smartphone and i decided to get one when a very large electronic market hat it on sale for  659,– €.  The price included a 100,– € voucher, which made the decision a lot easier ;-).

Lets start with the biggest disadvantage of the Galaxy S6 compared to earlier modells, you won’t be able to exchange the rechargable battery in the new modell. But the built-in battery lasts a whole day and depending on the usage you’ll end up with somewhere arround 30% capacity. Samsung implemented a fast charge which load the battery up to 50% capacity in 30 min.

Even though i installed quite a few apps i still got 21 GB of memory free, so i don’t really miss the canceled option to extend your memory for images or music with a SD memory card. But you can save a lot of mp3 files in 20GB if you want too 😉

The Samsung S6 is equipped with a 16 MPix main camera and supports video recording in 4K mode. The camera offers an image stabilizer and a tracking AF.

Of course a smartphone cannot substitute a system camera or a DSLR, but the image quality is pretty good, and enough for a selfie or a quick image taken for this blog with a width of 600px. only.

If you’re interested i uploaded a full size image, and there you get a quality enough for  13x18cm print.

The display offers a resolution of  2560×1440 px. and it is just marvelous in terms of sharpness and brilliance. Remember we’re talking about a display with 5.1 inch offering the same resolution like my 27 inch LCD monitor Dell U2711 😉 Due to the high resolution you can judge posted images on Facebook or Google+ .

The brightness of the display is sufficient to use the smartphone in bright environments, placing the normal troubles if sunlight hits the display directly.

On older smartphones you could pick the method how the effective position would be determined by smartphone. I therefore didn’t activate GPS services and the position was determined either by the phone network or a WLAN, mainly because an activated GPS chip reduces overall runtime of the smartphone.

The S6 offers to activate/deactivate the positioning services only, but it doesn’t let you choose how the effective position is determined, this is done automatically either on network or on GPS base. But after a couple of weeks of usage i didn’t get the impression that activating GPS is too much power consuming. 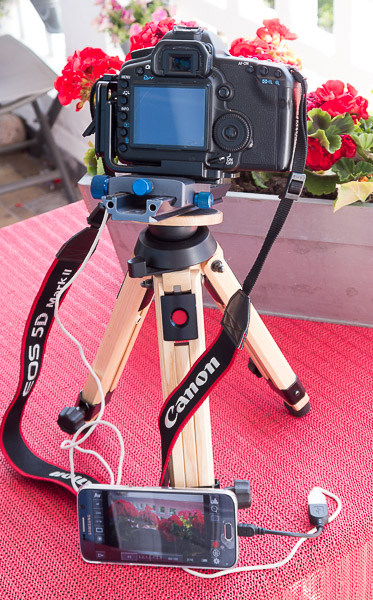 Comparing performance between the S6 and my former smartphone the S3 is just like comparing between a Volkswagen and a Porsche. Switching form one to another app is done without any delay. The reason for this performance is quite sure 3 GB main memory and the 8 core processor. With this smartphone i can read almost all Google notifications and eMails in the 30 min. bus trip to office.

There is no jerking playing videos and you don’t have to wait for an opening app.

What really make me happy isn the fact that DSLRController runs without any problems on the new phone. After inserting a  OTG cable a connection is established to my  5D MK II and you can start.

The Samsung Galaxy S6 to me is a successful smartphone, even though Samsung cutted off 2 main characteristics, the changable battery and the option for a SD memory card.

There are no wishes left, especially performance and the display. The price should drop after a short while so the S6 even gets more attractive.

What do you think about the Samsung S6? I’ll be happy on your comments and questions too.