Alterantive  JPEG for capturing is a provoking question, but looking at the posts in social media and how many images from a smartphone are posted in JPEG format, this questions has to be answered.

Quite a time ago i posted an article about the question which format from RAQ,DNG or JPEG you should use for your every day shootings. I didn’t change my mind, so RAW still is my only format. But even though i use RAW as a defualt format, RAW has 2 main disadvantages. First of all RAW leads into pretty big images (especially true for shooting RAW with a smartphone, which leads into file sizes arround 30MB for a 16 MPix sensor). DNG is only used for converting timelapse sequences, because i only need 1920×1080 pixels for generating a video.

But the main problem with DNG/RAW is that you have to process your images first. 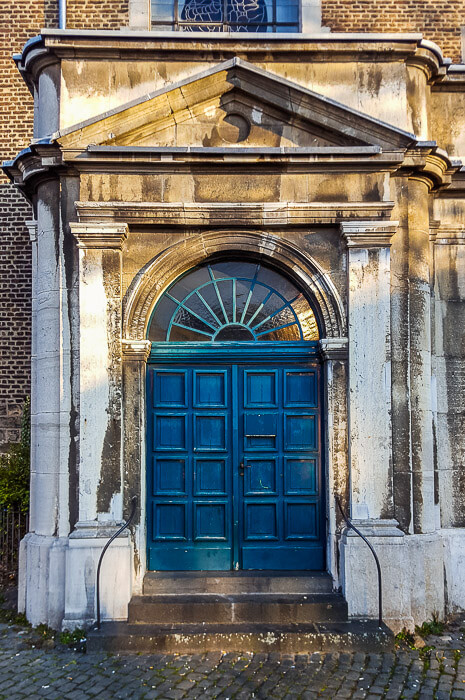 Even though image processing isn’t a problem on a recent smartphone the time and resources effort is not negligible. On vacation for instance you wan’T to concentrate on your free time and maybe send vacation grettings to your family via EMail or WhatsApp, and for this purpose JPEG is more than sufficient.

Image processing can be done with apps like Lightroom Mobile or another raw converter on a recent Smartphone or tablet without any problems, but you’ll have to deal with pretty big file sizes which might be a problem on a mobile network. But away from smartphones, what about DSLR or other system cameras?

Most of the systemcameras or DSLR offer an option to record captured images in both JPEG and the cameras RAW format and depending on the camera sometimes you even choose different memory cards to store RAW on one and JPEG on the other card, you you have a sort of backup right away.

But is a JPEG right out the cam usable? I mean as an alternative to the RAW format with processing opportunities and not only to post somewhere on your favorite social media. On a little tour i setup both my Canon 5D MK II and my Lumix to record both JPEG and RAW format.

First of all i have to say that the results doing JPEG were very pleasing with both cameras. File size ranging from 7-10 MB/pic with the Canon 5D MK II and from 6-9 MB/pic with the Lumix G6. The differences depend on details and colors, so for example the underexposed image in a HDR sequence form the 5D MK II was only 3,5 MB in size.

The other realisation is that every camera manufacturer do their own raw format so it’s almost impossible to process RAW and JPEG file to euqal results. But anyway the resulting JPEG images are excellent even as a final result.

And what about image processing

The bis surpirse about this comparism is that JPEG images could be processed very good. As an example we’ll take an image form the HDR sequence which is underexposed by more than 1 EV. 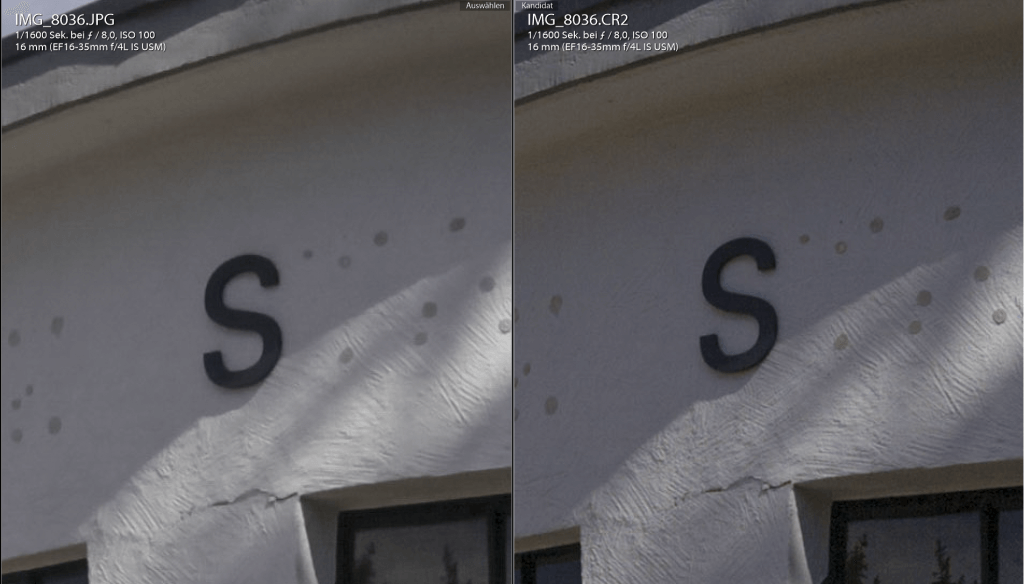 The RAW file is on the right hand side, the JPEG image on the left both taken with a Canon 5D MK II. Judgeing the pictures you’ll notice more noise on the RAW image without any noise reduction apllied during the image process. And consider the images were brightend upby more than 1,5 EV which is a lot. On the other hand there are more details and a little bit more sharpness in the RAW file.

While brightning up an image works pretty good on a JPEG file white balance is a little bit different ;-( 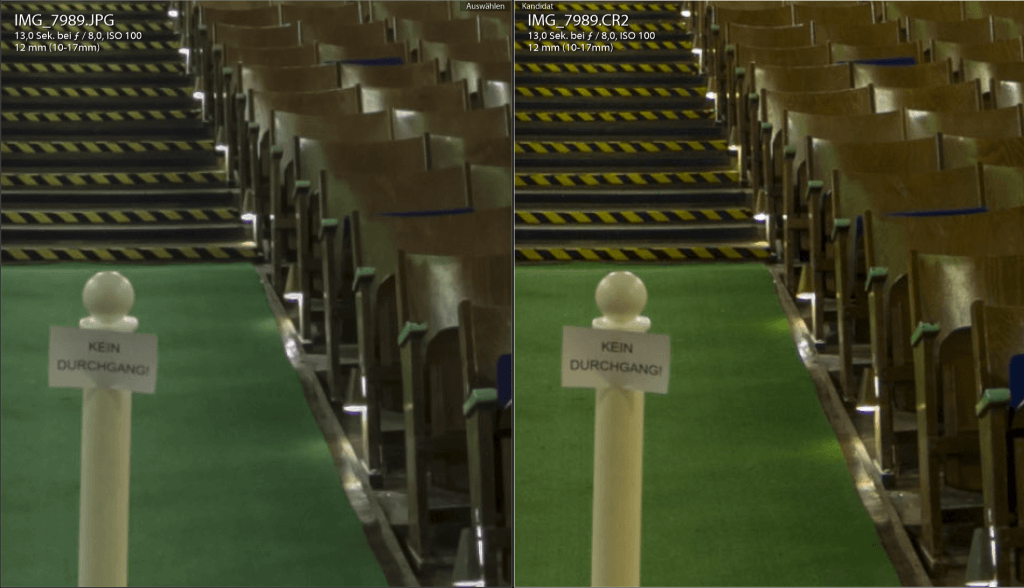 Here the RAW file is the better choice, because the green tones from the carpet are closer to the original than the JPEG file. Now let’s compare the images from a Lumix G6. 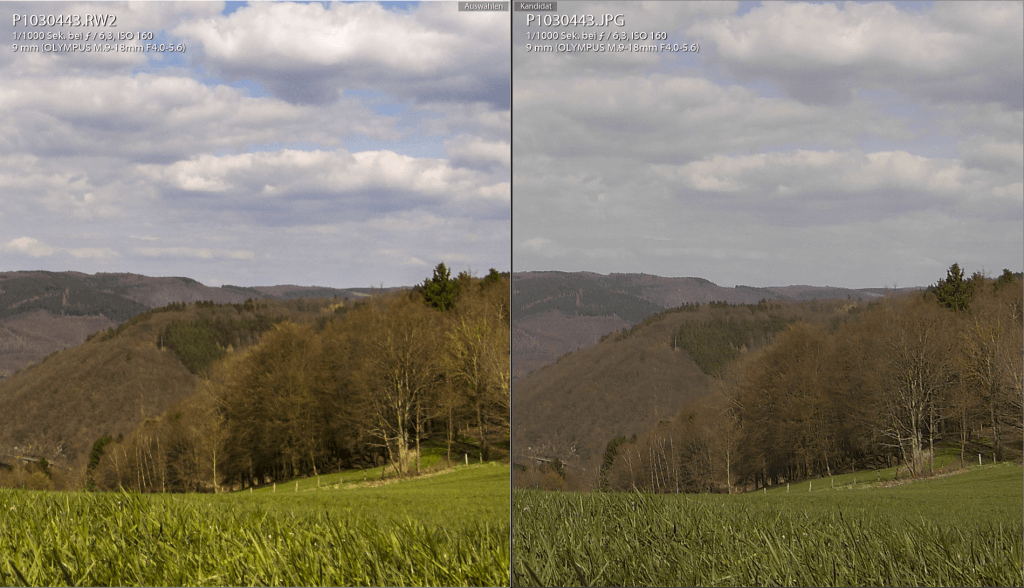 Despite the differences in color we can state the Lumix JPEG engine is doing a better job on contrast arround the tree in the foreground, but overall sharpness is better in the RAW file.

On perfect lightning conditions it is no problem to use JPEG, especially if you don’t want to process your images first. Maybe you’ll test your camera with JPEG/RAW to learn about the capabilites in different light- and contrast conditions. Todays memory cards have enogh capacities to record both RAW and JPEG at the same time, an option which is offered by most of the system cameras.

This way you’ll get a JPEG for immidiate use, like posting on social media and for critical use you still get the RAW file, which has a lot more processing capabilites. If you’re using Lightroom you just have to tell Lightroom in the preferences that JPEG and RAW are seperate images.

With this workflow you have all options, getting an image for immidiate usage in a (very) good qualitiy and preserve the RAW capabilites. And even processing an JPEG image is psossible, like thge above example of the chruch door was captured with a Galaxy S6 and processed via Lightroom Mobile.

What about your usage of JPEG/RAW? I think this comparism showed that JPEG is better than i thought, even though i won’t switch to JPEG 😉 But for a holiday trip the combination shooting both JPEG/RAW is an alternative. I’m looking forward to your comments and your questions.