The DJI Pocket 2 is a very small compact camera primarily for video recording. But there are also useful accessories here.

DJI itself sells the DJI Pocket 2 in 2 different versions, once the camera itself and then the Creator Combo, which contains some useful accessories. An essential part of the Creators Combo I would still like to list as useful accessories, for all those who may have bought only the device itself first.

I have recorded a video about this once:

The Creators Combo comes with a small tripod, the value of which is debatable. The Do-It All Handle extends the device and establishes a WLAN connection as well as a wireless microphone connection.

Even though the built-in microphones are already quite good, the quality improves again by using the wireless microphone. This should not be underestimated. 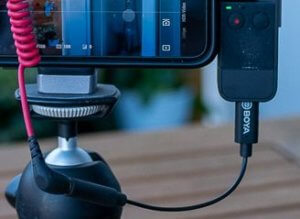 With the WLAN option, this can of course also be used to connect the DJI Pocket 2 with the Mimo app. This allows you to film yourself with Active Track, for example.

Since the DJI Pocket 2 does not have a closable aperture, only ISO or ND filters can be used to keep the 180 degree rule while filming. I have ND filters from Freewell in the strengths 8x,16x,32x and 64x.

On the one hand these filters are very small and a bit fiddly to handle, but due to the magnet coupling they hold quite well.

There is also a combination of ND and polarizing filter. However, I decided against such a combination for 2 reasons. The polarizing effect depends on the angle to the sun. And I find that quite difficult to control in video. Furthermore, we have a 20mm wide-angle lens with the DJI and here it would be feared that the polar effect does not have an even effect over the entire image angle. And that sometimes also leads to quite unsightly effects. 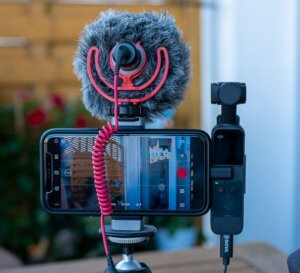 It is available from DJI itself, but I chose the one from PGYTECH, which at least on the pictures looks confusingly similar to the DJI original. Since both the DJI Pocket 2 and the smartphone are clipped in here, the connection is much more stable and there is little strain on the Lightning connector.

The clip has a tripod thread, so that you can also use a small tripod as a handgriiff here. An external microphone, such as the Rode VideoMic, can be attached via the existing accessory shoe.

If you want to use an external microphone, you do not necessarily need the original DJI adapter. I ordered the Boya By-K6, which adapts the USB port to 3.5mm jack. And this works great with a lavalier microphone or the Comica Boom X WLan microphones.  Of course you can also connect the VideoMic mentioned above. 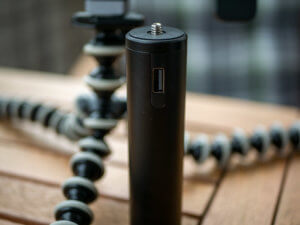 The battery of the DJI Pocket 2 is quite small with 875 mAH. Especially if you are on the road all day, it can be scarce. And that’s where the ULanzi BG-2 handle comes in, which offers a power bank with 6800 mAH hours in addition to the handle.

The DJI Pocket 2 is then supplied with power via a pleasant short USB connection. And with that, the DJI Pocket already lasts quite a long time.

And in conjunction with the handle from Pygtech results in a very compact unit to film. Has convinced me in any case.

There are some useful accessories that make working with the DJI Pocket 2 easier. Some, such as the ND filters, however, play a role everywhere in connection with video.