If you are a panorama enthusiast like me, there is the wish to export those panoramic images to a regular video and present them together with regular photos and videos.

After an error trial with pano2movie (it seems that this software isn’t developed any more) or Fraps i use for these tasks Adobe After Effects. In my article Kugelpanoramen in Video einbinden (sorry german only) i explained the process and the backgrounds and devolped a template for After Effects, which you can download for free.

Panolapse first task is to render videos from a timelapse sequence, which i described in my article [post id=434]Rendering timelapse with Panolpase[/post], but according to the website Panolapse is able to render a video from a equirectangular image, displaying 360×180°.

As a starting point i used this image 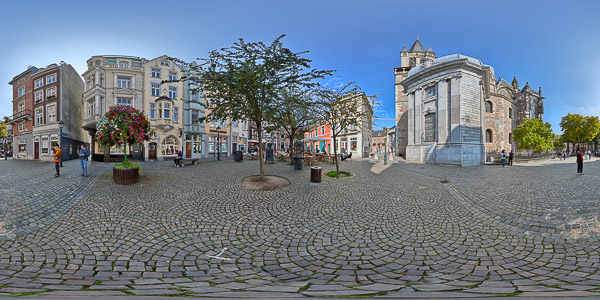 Since a video can demonstrate the functions better than 1000 words, just have a look at the screencast. 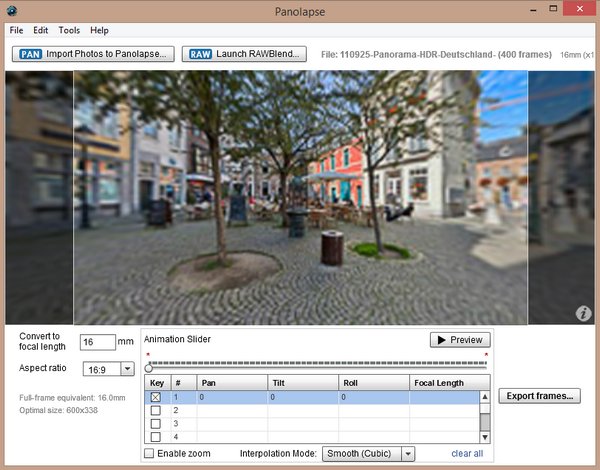 A fully controlled 360° pan through the panorama was’nt possible, even fill in the parameters manually in the table. I tried it a couple of times, but the limit seems to be somehwere arround 300° depending if you’re tilting or not and on which position you start or end tilting. The later is necessary to show a higher building for example.

Compared to pano2movie the possibilities offered by Panolapse are an improvement, but you’ll have to gain a lot of experience because you have to determine the number of frames at the beginning of the process. This will set the length of the exported video.

The price tag is very small comapred to After Effects and you have the timelapse function also built in, but the developers should fix a couple of bugs in the software, since it is an alternative to Adobe Effects.

One “error” is the perfomance, more than 30 minutes to export a 16 sec. video is much too long or in other words would only be acceptable if control would be more precise.

What do you think, is Panolapse an alternative to export your panoramas to video? Just leave me your comments and suggestions, or even better, maybe you know another alternative for this task.