Join Instagram and Twitter to Lightroom takes a look how to upload our images to social media, but also tries to take care of Google+ and FaceBook. 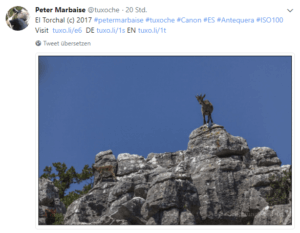 I’m active on  Twitter,Instagram, FaceBook and Google+ , so there is the question on how to upload images automatically from within Lightroom to all the mentioned sicaol media accounts. This can be accomplished by installign the appropriate plugins which are offered by a lot of third party programmers. As a basic i use a couple of plugin from Jeffrey Friedl, which can be licensed with a very small donation. Jeffry also offers a plugin for FaceBook and Google+ but so far these plugins were to limited bacause of the social media API, so i don’t use them.

For my Twitter account i use Jeffrey plugin for quite some time now, and for Instagram i use  LR/Instagram plugin. The later one can be used without a registration, but in this state it is limited. You’ll have to wait a couple of seconds before the download starts. If you want to avoid this you’ll have to license the plugin for 10€.

Twitter,Instagram, FaceBook and Google+ make use of hashtags, but only the plugin LR/Instagram offers a seperate field to edit hashtags for sharing purposes. But i aimed towards generating the same or at least almost the same looking posts on all accounts.

The Twitter plugin can extract almost ev4ery metadata out of Lightroom’s database, so such a text could be generated automatically. In the above box i placed the following text:

Line 1 take the caption of the selected image, line 2 the name of the camera maker, line 3 the used lens and line 4 generates a text with the exposure data like for example  “1/125 at f/11 at ISO 200“, line 5 gernerates a copyright hin from the Year when the image was taken and at the end hashtags are generated from the location using country and city names. The  S2U dis a token which substutes spaves in the city name with underscores. If the image was published in its own article the field “JobIdentifier” contains an URL to this article. If this field is empty the expression is filled with an default URL to my picture blog.  A list of the available data fields is shown here. 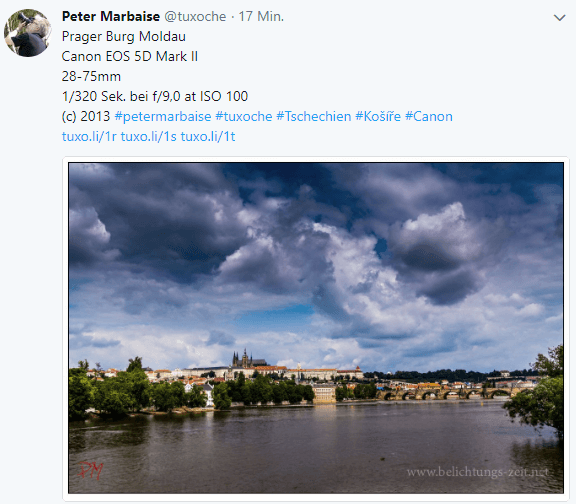 There are two exceptions one not all variables carry the same name in LR/Instagram and the plugin so far is not able to evaluate expressions. A list of the available variable names can be found here:

And here is a screencast which handles all plugins:

As mentioned in my article from 2013 i described that i changed my workflow for geotagging my images. I don’t use Geosetter anymore but use the map support in Lightroom begiinning with version 4.

If yu do geotagging in Lightroom all data in the country,city are in italic in the appropriate fields. You are able to search for all geo informations, but for our plugins those data is not available. You can click on the field name to get a popup menu to chnage this, but this method can’t  be used for a longer trip with changeing locations.

And that’s where an older plugin from Jeffrey Firedl comes into play, which i used before Lightroom version 4. 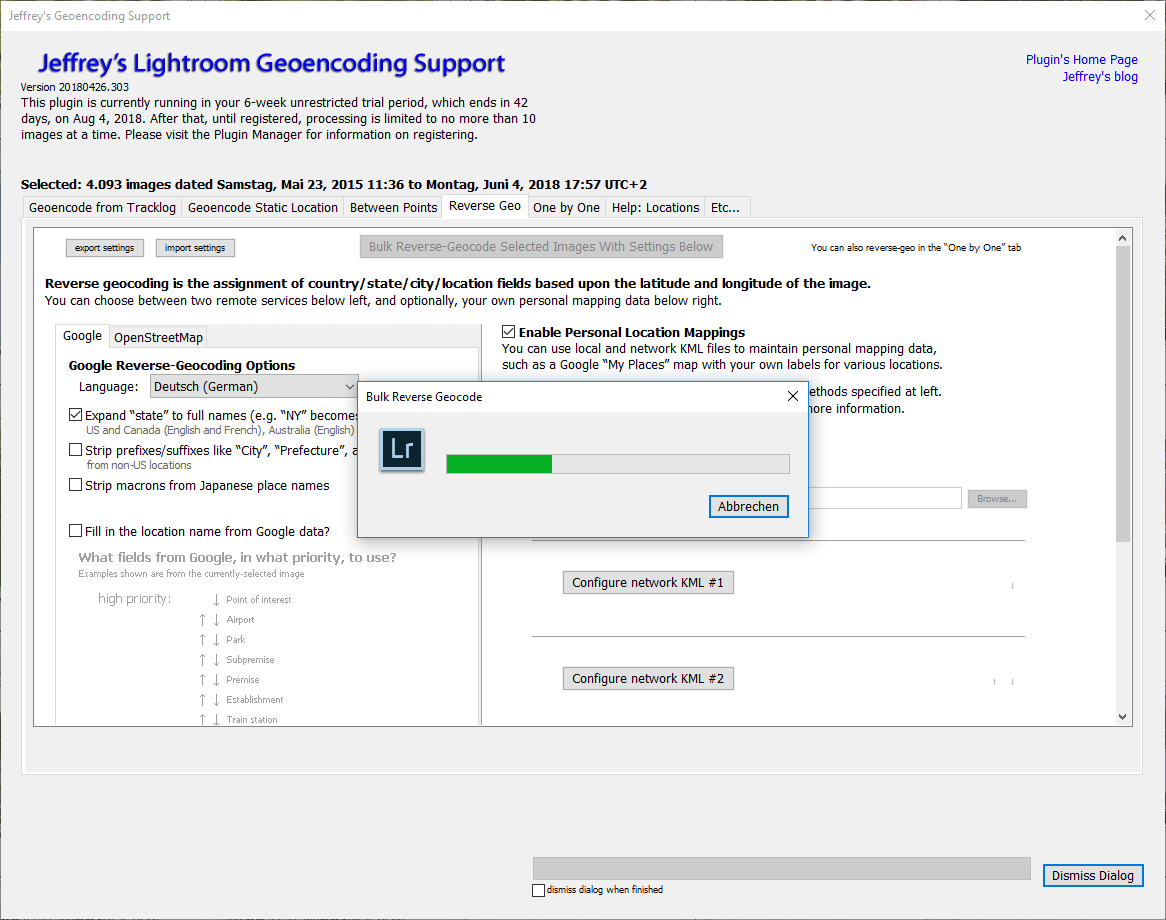 This plugin offers a reverse geotagging and overwrites all data previously foound by Lightroom. But after this procedure alll geotaging data are available for the social media plugins.

These two are missing so far, but there is an equivalent solution. The plugin is  LR/Transporter which also reads out Lightroom’s database and uses variable names, but this plugin can’t upload images but it can be used to generate text files along with the exported image file. 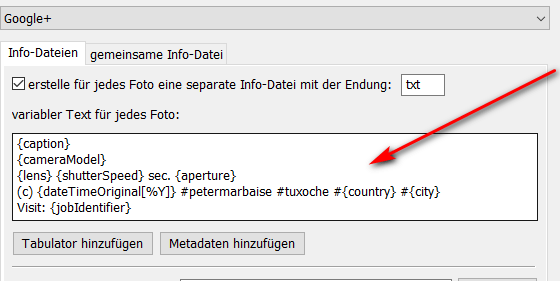 Just like the  LR/Instagram plugin this plugin can evaluate expressions but works the same way. The plugin writes a text file with the text. Placing the image and the generated text file on a cloud storage you’ll be able to share images to  FaceBook and Google+ from anywhere you like.

Of course this is not as comfortable as the other plugins but it is acceptable to me. As a result a Facebook posting could look like this: 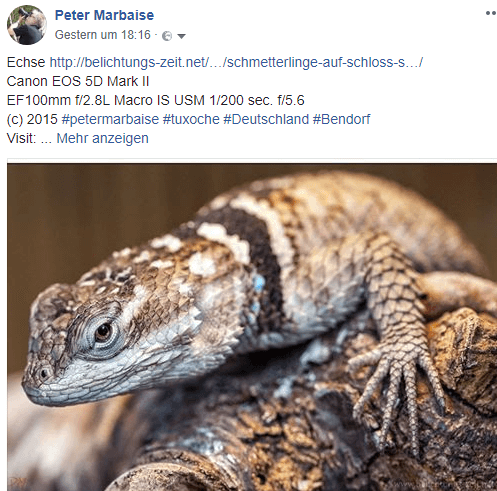 It always bothered me to generate the text files for Google+ and FaceBook  with LR/Transporter in a serperate process. During the holidays i tried arround with the plugin and found out the following procedere to solve this. If you have a defined export as a JPEG-file which is by default exported to the Hard Drive just change the selection in   “Export to”  to the modul  LR/Transporter . 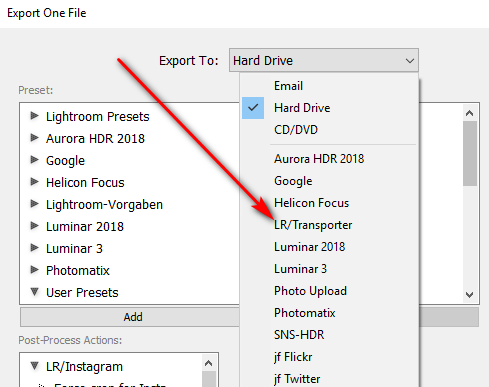 With this setting Lightroom exports the JPEG-File and the needed text file in one process.

Ok i reached my aim only with the help of 3 or better 4 plugins, but i can serve all social media accounts like   Twitter,Instagram, FaceBook and  Google+ either directly from Lightroom or with a little workarround. But this is mainly caused by the API’s of the different platforms.