Last week review 33-2018 and it is still too dry, but at least the extreme heat has gone … 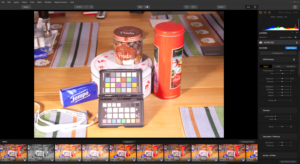 In the last week we took a look on ETTR, a technique to get the most quality out of your sensor. This “Expose to the right” asures, that most parts of the image will be moved into the brighter part. This will result in a gain of tonal differentation if you avoid real overexposure.

This technique avoids noise because you’re not forced to bright up shadow details, while there is enough details in the bright areas of the image. The exposure is controled by the histogram which has a little drawback though because if you’re shooting raw the histogram is generated from the buiilt-in JPEG.

Trying out this technique even with relativly extreme ISO settings you’ll get very fast to theresult that there is not that much difference, at least less tahn expected. This is due to our modern sensors and to the fact that modern image processing can improve a lot. But to get out the most qualitiy out of your shots just ensure a right exposure of the main image parts.

Anf of course its mid of August and there was a Microsoft Patchday again rolling out updates for Windows operating system and Microsoft apps. This tuesday you got an update correcting errors and critical security issues. This time Microsoft fixed 60 of these issues where 20 were critical according to Microsoft. Most of those errors and security issues were on the Internet Explorer and Edge browsers but also on the Windows shell. And because of the you already should have applied the update.

And last week there updates available both for the Litchi app and the DJI Go App for Android systems. Both apps offer minor improvements and error corrections only. In the Litchi app the company implemented a new function and that is to focus on infinity, that sounds interesting and should avoud to focus on a very far away object while flying. Too bad DJI didn’t release an update for DJI Go App 3 which conztols the Osmo Mobile 2 Gimbal.