With a drone you reach points of view for still photography and for video capturing which are not reachable with a regular camera. In particular video capturing needs a lot of concentration to get a smooth flight. But there might be alittle support. 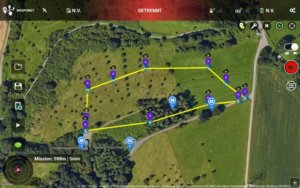 The DJI Mavic Pro is of course easy to fly but capturing videos at the same time its quite a challenge and needs full concentration on controlling the drone and the flight and at the same perform a smooth downward movement of the gimbal for example. And maybe i need a lot more practise.

But maybe the Litchi app i reported on lately can help us a little bit, because the app a feature called waypoints. For a general tutorial on waypoints with the Litchi app you might want to take a look on the Youtube video, explaining pretty good the features and the basic functions.

Even though DJI Go app features waypoints too the handling of waypoints in the Litchi is a lot more convenient. In DJI Go app you first have to fly from one point to another and mark the copter poistion as a waypoint. The big difference in handling to the Litchi app is waypoints are markable prior to the flight on a map and fly the mission later on. And doing this with a map not only works on a smartphone but also on a tablet and with the Litchi Hub in your favorite brwoser on a desktop pc. 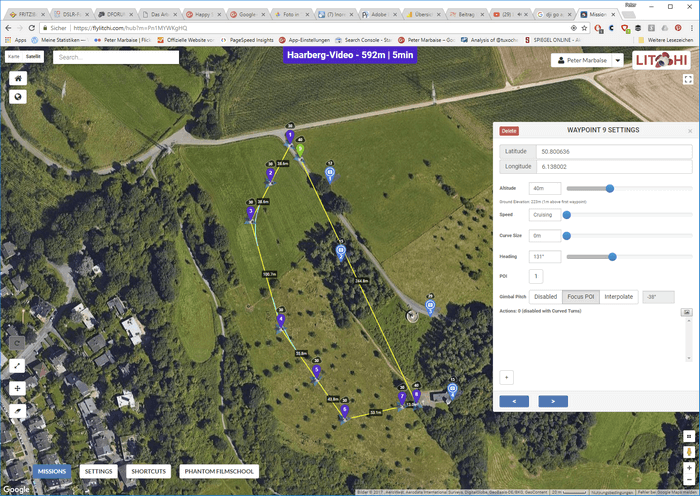 Now you can plan a complete tour at home, but you should be careful with unknown terrain, because even in a landscape tree could grow 😉 or power poles usually are not listed in the maps.

With the help of this app you can define a smooth curve between 2 waypoints and you even can set the radius of the curve. In addition you can define a lot of actions to every waypoint like capture a picture or a complete single row panorama:

You can start or stop video recording and of course you have full control on the camera and the gimbal gradient. The later one is automatically calculated by Litchi if you point the drone to a defined POI. With these option you can do a smooth filght and capture it on video. Here an example i did, and its the first 4K video i uploaded.

This is a beautiful option and makes planing fo flights including still photography and video recording with your drone a lot easier. Therefor the app is worth its price.

But don’t trust hte maps too much, because sometime a given flight height isn’t enough to capture tall buildings completely. For example i planned this flight arround Belvedere Water Tower, but only 2 images from the whole series show the complete building.

But Litchi is worth the price if you consider the other functions, like panoramic captures.