Capturing panoramas is in my focus, even though i neglected this in the past 😉 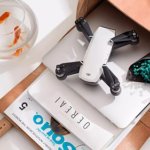 Capturing panoramas was interesting too me all the time and i already posted a couple of posts on this blog about the techniques used. Especially sphere panoramas with a little bit of help by a nodal point adapter are a lot of work but the results are worth it.

I cought my attention as DJI released an update for the DJI Go App to version 4.1.5 including a panorama mode, but this mode is for the Spark drone only and not for my DJI Mavic Pro.

Capturing single row panoramas with a drone is almost no difference to capturing a single row panorama with a regular camera. Just set white balance, exposure and focus to manual. Then you memorize outstanding points in the landscape which are a starting point for the next shot in the panorama sequence. You should take care that all image overlap by arround 30% to get good stitching results. The grid overlay in the app is a good help at this point.

A little bit of help from an app

While capturing single row panoramas is manageable without any further help a multirow panorama is  more complicated because you have to fly at the same time and kepp an eye on the drone.

At this point Litchi an app available for iOS and Android comes in handy which offers single row, multi row and even sphere panorama shootings. The appo offers a lot of other functions, but 25,– € for a smartphone app is not cheap at all.

In panorama mode you can choose the number of images to be taken which defaults to 8 images for a full 360° single row panorama.

In this case the final panorama was stitched using PTGui but with single or multi row panoramas you could use tools like Hugin or the Microsoft Composite editor.

Shooting panroamas with a regular camera i always portrait orientation which aslo can be done with the Litchi app to tilt the gimbal in this mode. You have to increase the number of base images in this case to do a full 360° panorama but the resulting panorama will be taller. But there is a display problem in the app after switching the gimbal in portrait mode and back the app will display videos min portrait mode too 🙁

Sphere panoramas covering the room with 360×180° are relativly hard to do. But Litchi can even handle this one but with some limitations. The drone captures 5 rows with 8 images for every row and 2 additional images for the nadir section of the image. Using PTGui or Hugin for the stitching process the result will look like this one here. 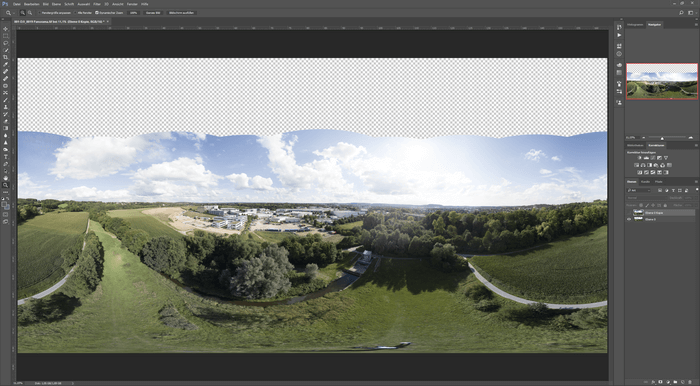 Normally capturing sphere panoramas you run into problems with the tripod but with a drone you’ll get a reverse problem, there are not enough images to cover up the sky area. In DJI preferences you can set the option for the gimbal to move up to +30° but even this is not enough, you would need another row at +60°.

Now you can use Photoshop to fill up the missing part of the sky area: 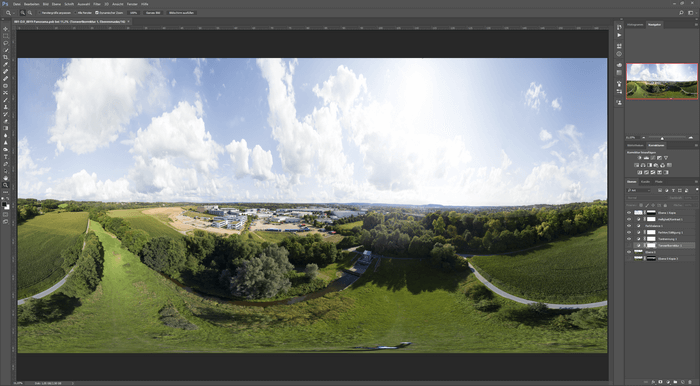 Filling up the missing areas with Photoshop is harder than it sounds. It is almost impossible equalize the differences in brightness not seeing a seam in a panorama viewer. Therefor my advice is to fill up the missing row in PTGui.

To achieve this i take a couple of images with mainly sky part like for example from my cloud archive, adjust brightness so they fit those taken with the drone and stitch all these images.  In this example i took the 42 images from the drone and 4 other sky images taken with my Lumix and stitched the panorama in PTGui: 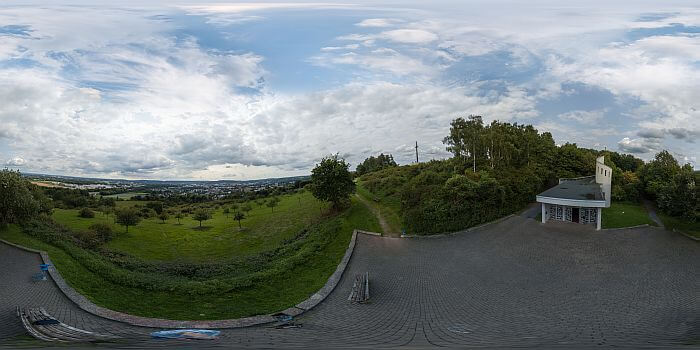 But in this image you probably recognize another problem stitching errors for example in the curbstones on the left side. This occurs because the drone is rotated arround the own axis and not in the nodal point. Thsi could be avoided by a larger distance to the ground.

Panoramaic captures and even sphere panoramas are possible with teh DJI Mavic Pro and the Litchi app if you don’t mind the limitations and correct the resulting images manually in Photoshop CC for example.

The Litchi app isn’t a real bargain on the first sight, but considering the other functions the app is worth the 25,– €.