IMatch follows the trend like other software companiers and uses the year number as a basic version number. So far there is no version 2018, but IMatch is a rock solid program.

The last time i reported in the 2014 on IMatch  because IMatch is a mangagement tool only, which needs another software like Photoshop CC, DPP or other tools to process the image. IMatch is available for Windows only, other operating systems are not supported. With a special add-on called IMatch Anywhere it is possible to access the database form any operating system using a standard web browser.

The price for IMatch is very fair with 89,– € and even IMatch Anywhere starts from 50,– € for the home edition, but i think this low price is due to the limitations of this the system so far, because with this Addon no changes in the database are possible (so far)

Installation works out without any problems on a Windows 10 system and the program creates an empty database. Now you can start to read your image folders, which can be stored on local or NAS drives. 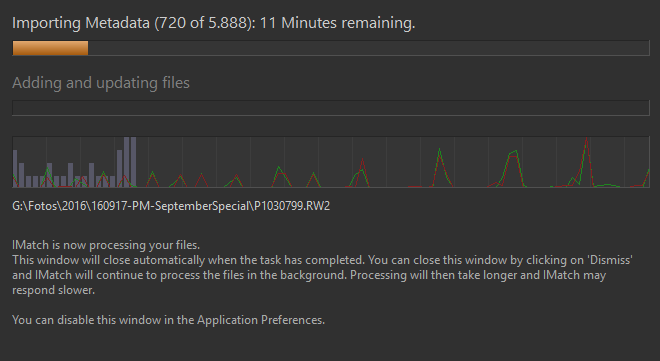 Importing all the metadata from your images takes a while and even a 8 core AMD Ryzen sytem is pretty busy during this process because the system uses all cores. After this process is finnished the system presents the following overview. 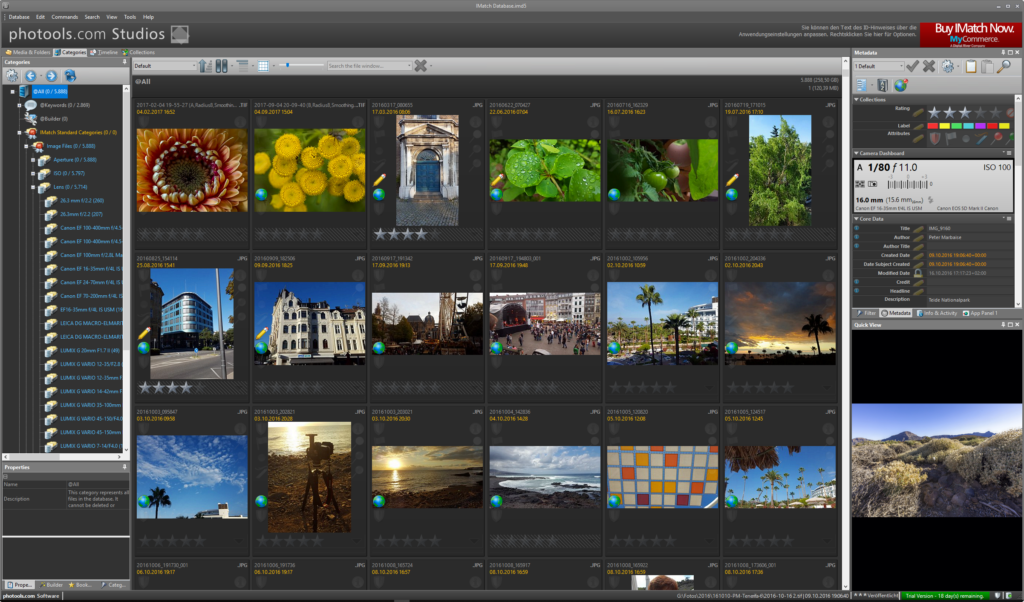 This view can bealtered to add a map or available apps. A single image kann be viewed with additional informations: 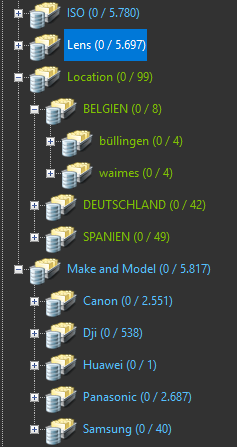 IMatch of course generates a lot of collections based on the different Exif metdata in the image files. After the import of the selected images folders there are collections for different categories like ISO,aparture or camera and lenses used for the capture. This is the main strength of IMatch and besides camera or lens data other categories like GPS metadata are imported too.

This is automatically while importing the image folders you selected, but the question is if you need all categories generated by the program. For example one collection is generated for every aparture number used.

And of course categories for the timeline are not missing. While those for year and month are useful i doubt that collections for every day can be used if your searching for a specific image.

For the lenses you used there seems to be  an error in the program, because some lens names appear twice. For example my  Makro Leica Macro Elmarit 45mm/2.8 is listed with this name and the same but with the mm information. Or my Canon 100-400/4.5-5.6 L IS USM is listed as a Sigma lens.

Another problem is the selection of an external editor to process the selected image. After the installation in my system there is Photoshop CC added to process a raw files. But this selection is done only by the Windows mapping for an application to a file ending. On my system .rw2 files from the Lumix G81 were assigned to the FastStone Image viewer.

Opening the raw file not in Photoshop CC but in another editor lets say Luminar 2018 this is possible only by changeing the assignment in the Windows operating system. There is a menupoint “open with” but this only open the Windows dialog. Too me this is a step backwards.

IMatch is rock solid because the program is arround on the market for 10 years, but handling the external editor is a step backwards compared to IMatch5. In addition handling of the lenses used to capture an image is another problem in some cases.

IMatch Anywhere will be an interesting addon if the program allows to alter the database mainly for the keywords. This where i personally find the concept of Lightroom CC more interesting.