My old monitor, a Dell U2711, is now having display problems after almost 10 years, so it had to be replaced. 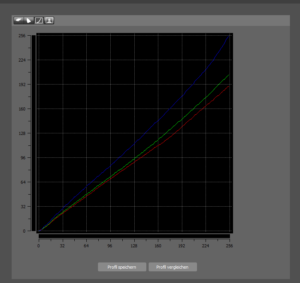 At that time I had bought a Dell U2711, which according to tests had an excellent coverage of the sRGB but also AdobeRGB color space. The monitor also served me very well with the X-Rite Display Pro profiling.

But for a while now, I noticed during the monthly profiling that the monitor was getting darker and darker, and no longer reached the required 120 cd/sqm. In addition, the blue channel deviated more and more from, so that further corrections would have been erfordelrich here. however eliminzt the Dell U2711 no seperate setting for the RGB colors.

So the search for a successor began. My requirements were actually simple, it should be a 27 inch WQHD monitor with good color fidelity.

I recorded a video about this: 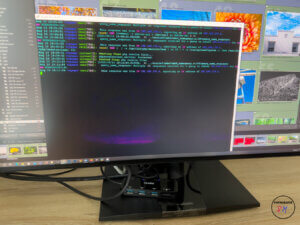 First, I came across the Viewsonic 2768 during my research, which is highly regarded even by Prad because of its possible hardware calibration and is also currently traded at an affordable price. However, since I also wanted a bit more convenience in terms of USB, partly because of the Macbook Air, the choice fell on a Viewsonic 2768a.

The monitor also appealed to me in principle, as it offered a USB HUB that could also charge a Macbook via the USB-C port at the same time.

Unfortunately, this monitor had a picture defect that 2 large purple areas appeared in the lower area, which was ultimately unacceptable. So the monitor went back again.

Then I stumbled upon the Dell U2722 DE, which also has a USB hub, a KVM switch and everything you could want in this class. 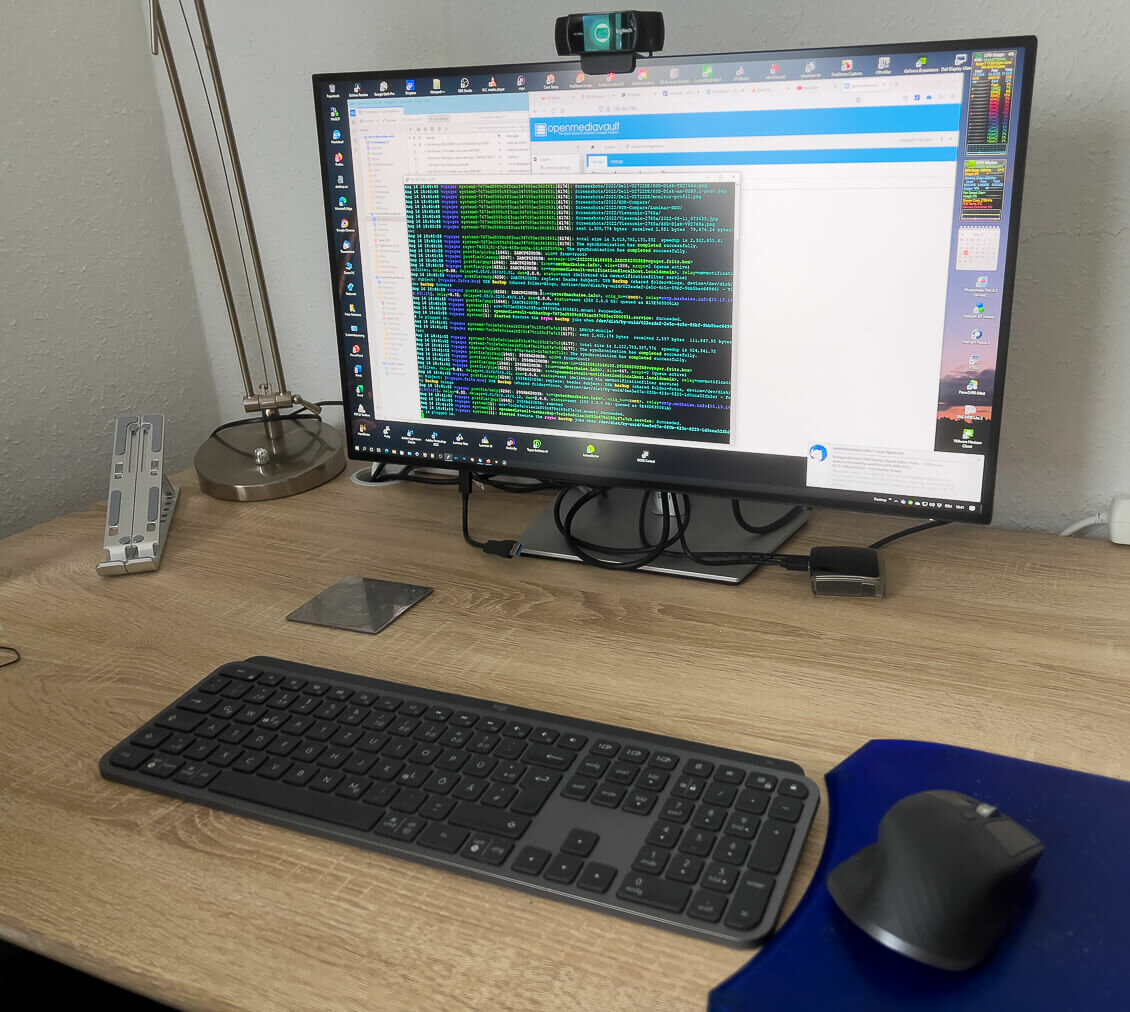 The monitor offers a very clear picture and Dell specifies an sRGB coverage of 100%. The DCI-P3 color space, which is important for video, is supposed to be covered with 95%. The IPS panel is very stable in viewing angles and is operated with 10-bit color depth. However, I haven’t found out yet if it’s real 10Bit or 8Bit + FRC 😉 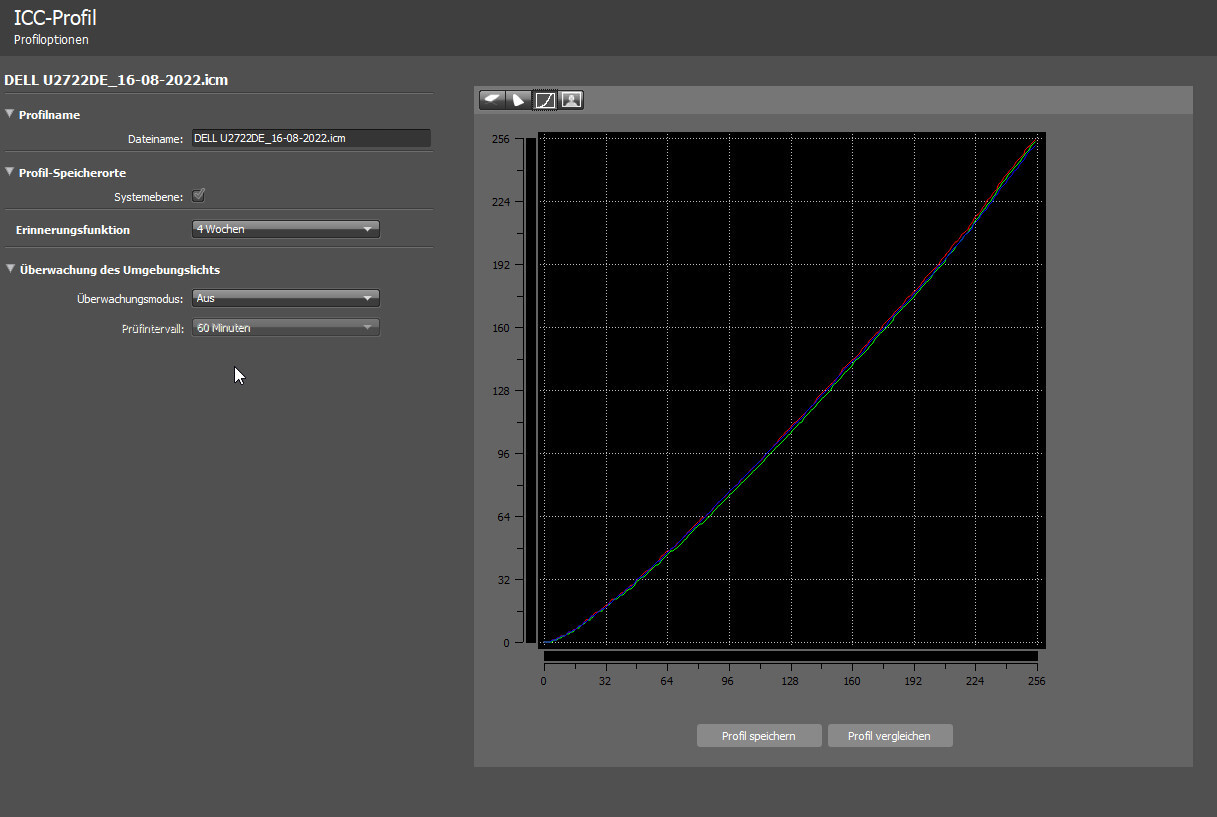 When profiling with X-Rite Display Pro, there was hardly any need to intervene compared to the factory settings. And with the brightness I have now wueder plenty of reserve, because it is currently at 35% to reach 140 cd/sqm.

The monitor offers a lot of ports on the back and on the bottom.

Particularly noteworthy is the RJ45 port and the USB ports. There is a USB-C port, e.g. for a Macbook, which not only transmits video, but is also supplied with network and up to 90W of charging power. This is sufficient even for demanding applications on the Mac, e.g. with Da Vinci Resolve.

Then there’s another USB-C upstream that connects to the PC with either a USB-A to USB-C or a cable with only USB-C ports. Then this cable also provides the PC with networking and the appropriate USB ports. And since this is USB 3.2 Gen 2, you also get the corresponding speeds, but you have to use the right cable.

The USB Cable values refer to any USB-C cable, while Original refers to the one included with the monitor. Direct indicates the values when the NMVMe disc is connected directly without a hub. Nevertheless, the values via the monitor’s hub are impressive.

For me, the Dell U2722DE is a suitable successor that offers more flexible options because of the charging option via the built-in USB hub. In addition, there aren’t quite as many cables on the desk anymore Color coverage and 10 bit display without banding predestine it for use as a monitor for photography and video.