After the final release of Luminar NEO with the HDR Merge module last week and no more problems it was obvious to compare the different tools. 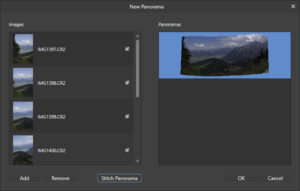 I have already reported about HDR tools several times, of course also about the predecessor Aurora HDR. And a comparison of different software can also be found as an article, but it is already 7 years old.

With the HDR Merge module, a competitor has now entered the field and since the last comparison, Lightroom Classic can also merge HDR exposure series.  And in the meantime, the times are also long gone when you could recognize an HDR image from afar.

I have recorded a video with examples of this:

The comparison is made with the tools I use regularly.  That is of course now the HDR Merge module, Lightroom Classic and Photoshop CC.

With these 3 programs, the HDR extension or Implemtation is part of the subscription. Only with regullary Luminar NEO licenses the HDR Merge module is liable to pay costs. It then costs 49,– €.

In addition, the classic Photomatix and SNS-HDR Lite are included. The latter is a console program that can take over photos as a droplet under Windows.

Photomatix costs 79,– € as a full version and also brings a plugin for Lightroom Classic that I like to use.

Since meanwhile all programs pursue the goal to come as simply as possible and perhaps with the support of artificial intelligence to the goal, a simple Bedeinung plays naturally a large role.

But not only the ease of use but also options for editing an HDR image as well as the price play a role in the evaluation. 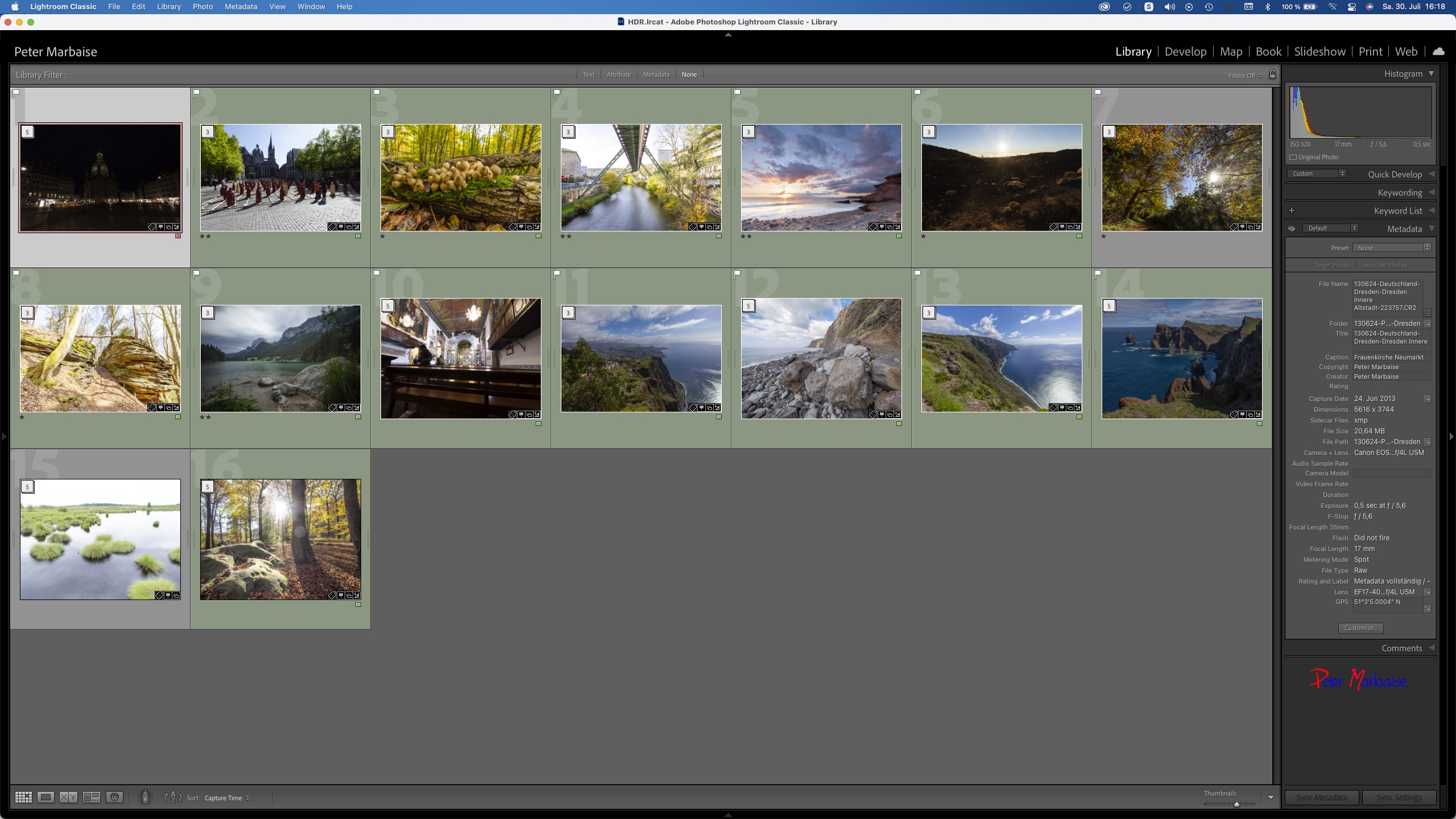 The HDR images were all created with the default settings, only when aligning the individual shots and for the elimination of ghost effects were the appropriate options selected.

Actually, I had planned to use all the programs to compute different exposure series together and then present the results side by side, but Photoshop CC threw a spanner in the works. 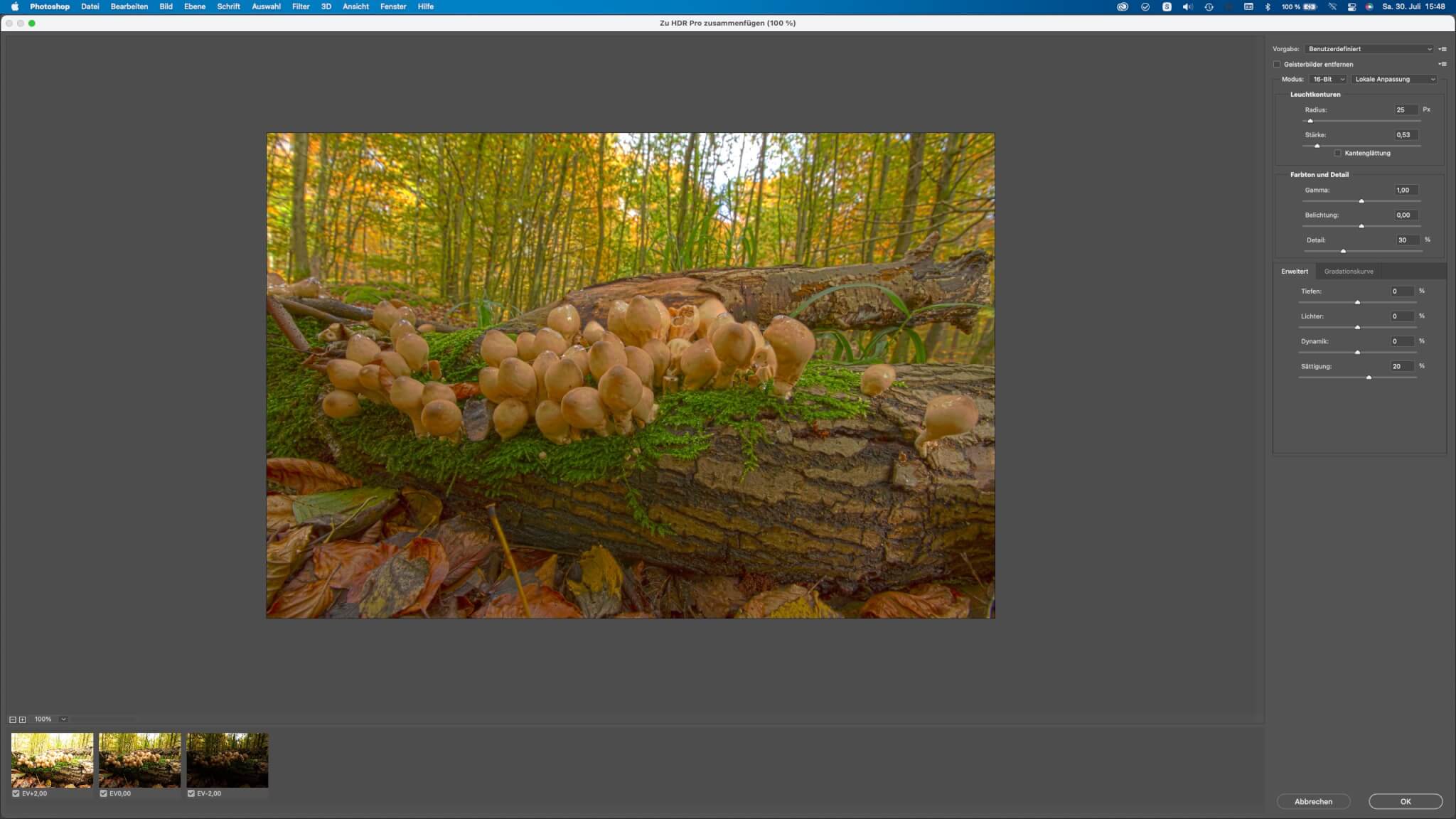 Photoshop loads the images into Camera RAW first, of course, and then calculates them together. Then it generates a preview like the one above. In this preview you can make different settings, e.g. highlights, shadows, gradation curves etc.. I don’t understand this as easy to use, but the later generated HDR image has nothing in common with this preview.

I have therefore decided to leave Photoshop CC out of this comparison of HDR tools.

Lightroom Classic makes it quite easy for the user after selecting the images. A dialog with few options appears. One should only make sure that one selects “Align”. 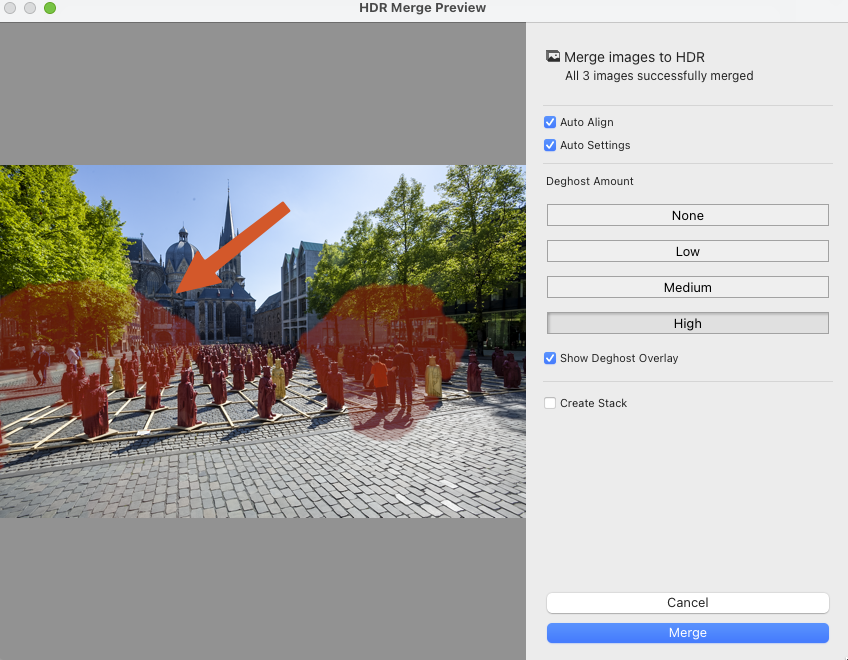 If necessary, select the removal of ghosting effects and their strength. Here it can be helpful to have the areas for the ghosting effects displayed by overlay.  And Lightroom wouldn’t be Lightroom if it couldn’t combine the final image and the base images directly into one batch. 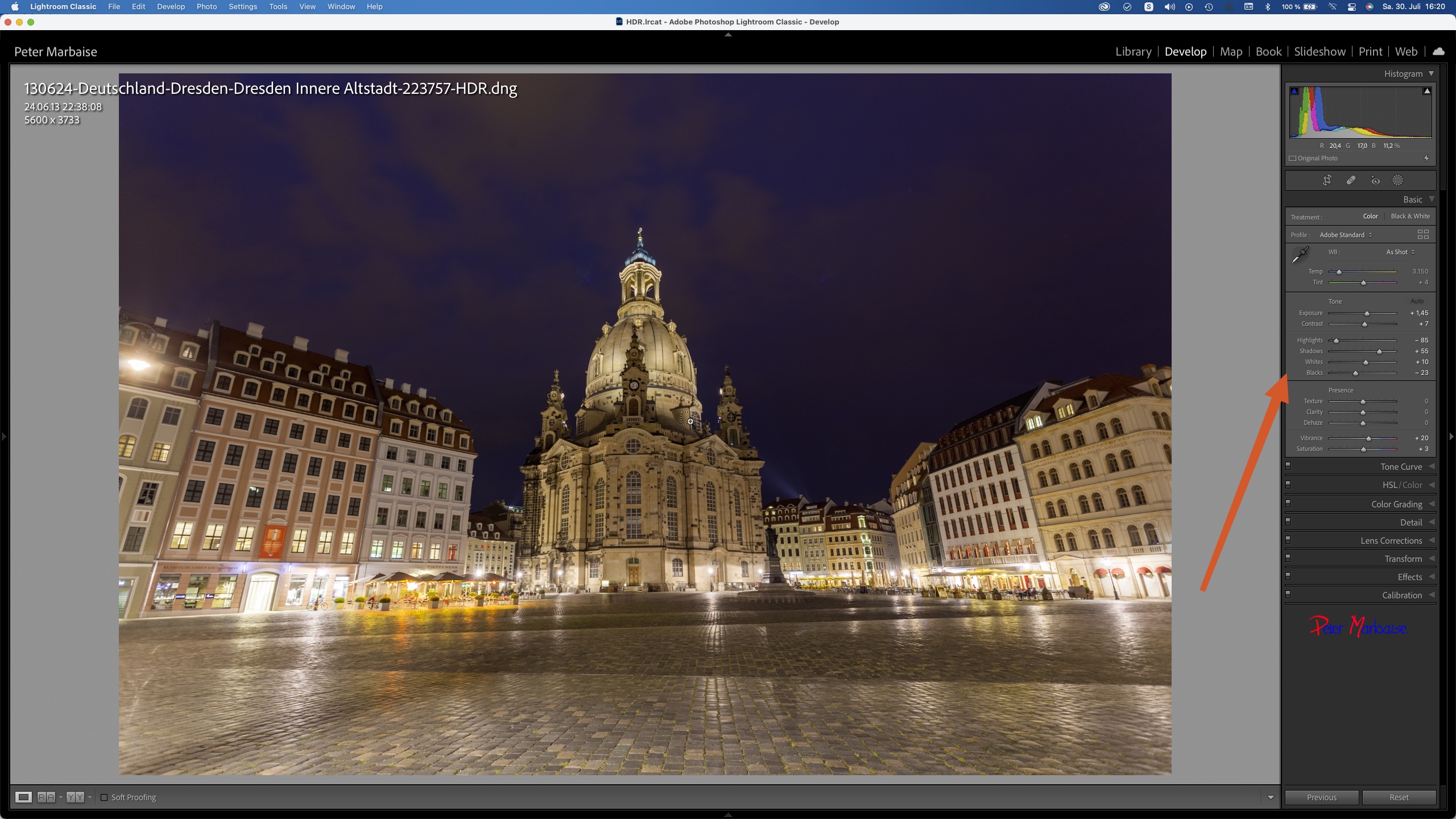 However, Lightroom has the peculiarity, once you look at the generated DNG file in the Develop module, to have almost exhausted highlights and shadows development. 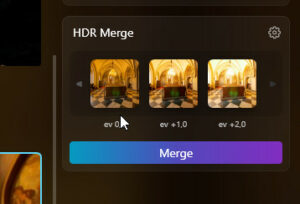 The module for Luminar NEO is also very easy to use. You simply drag the selected images into the module and can merge them there.

Again, the operation is simple. Just as with Lightroom, you only have to specify whether the individual images should be aligned and the strength of the ghosting effect.

In contrast to Lightroom, HDR Merge does not have a display of the affected areas in which ghosting effects are to be eliminated. As a compensation, however, you can specify the base image in HDR Merge. Here it is recommended to specify the image with the correct exposure or at most one with a slight overexposure. You should avoid underexposed photos from the series. 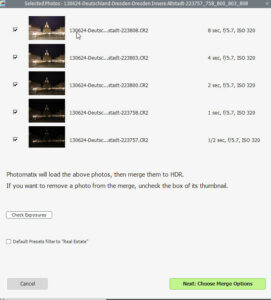 This program has by far the most setting possibilities. However, it is easy to use because it guides you through the various steps.

This starts with loading the images from the exposure bracket and ends with aligning the final HDR image.

Since things like exposure corrections or white balance can also be controlled here, you can process RAw files very well with it and get a finished HDr image without needing any other tools for processing if necessary.

It is even a little easier if you call Photomatix with the included plugin from Lightoom. Then the result, usually 16-bit Tiff is imported into Lightroom and also stacked.

The tool is an offshoot of SNS-HDR and can be downloaded for free. The Insztallation sets up a Droplet under Windows. If one enters here under the properties still the parameters –tiff16 and safety precaution –srgb, the possible operation is already settled. The program automatically aligns and calculates the HDR image, but this free version has no option to remove ghost images. 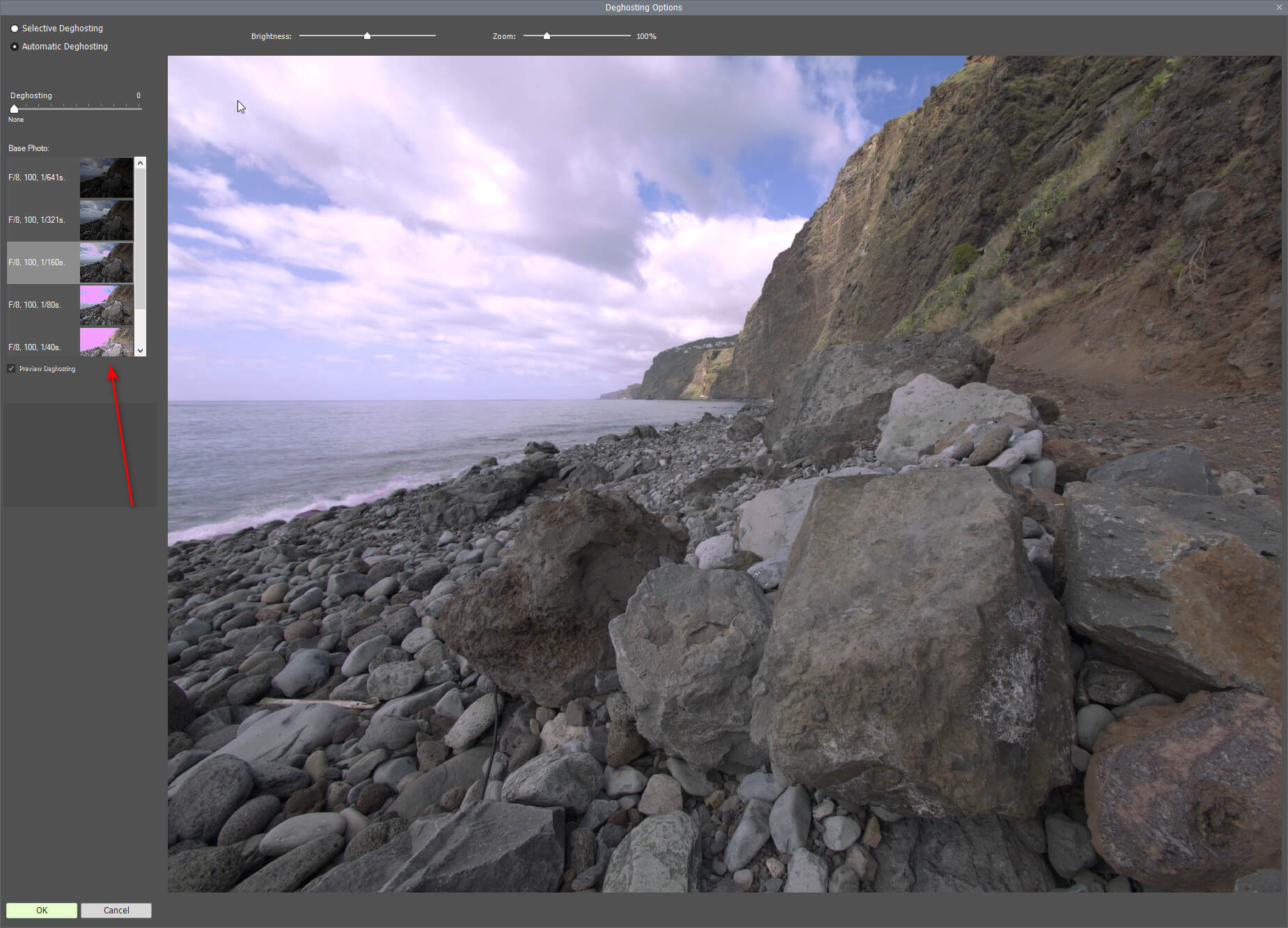 However, just as with Photomatix, I had the problem here that with some images from the Lumix G81 in the overexposed images the sky was displayed in purple, which then of course also had an effect on the finished image.

The differences between the programs are relatively small. I show you a selection here: 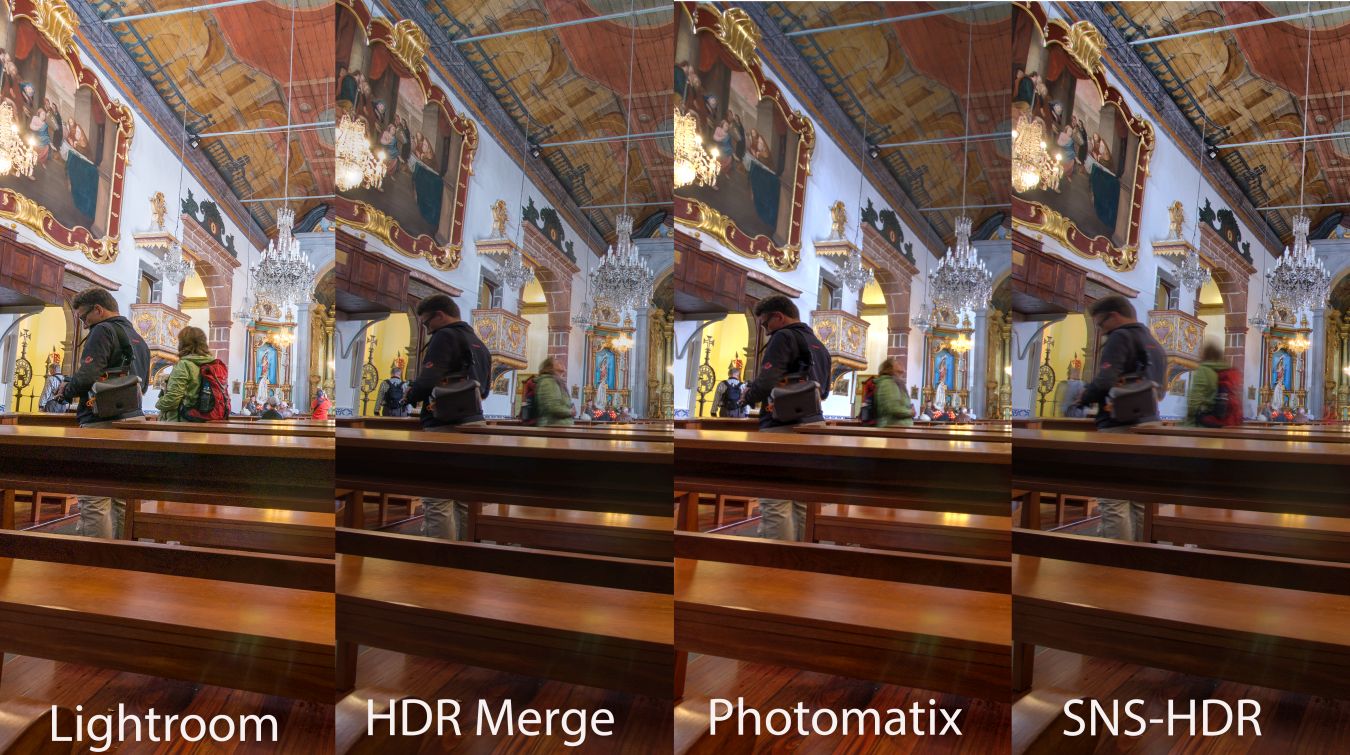 The differences are smaller than expected and basically all programs produce neutral images. (except for the magenta problem with the Luix shot in Photomatix and SNS-HDR). Tedentially the results are a bit brighter with Lightroom and a bit darker with Photomatix. But this is absolutely no problem, that you can’t balance by a later processing.

And the winnner is …

Photomatix beats the other competitors by a very small margin, just one point.

With this narrow gap, no one needs to look at the other programs anymore, because Luminar HDR Merge and Lightroom also deliver very good results.

What do you think about the comparison? And which tool do you use? Write it to me in the comments.