Minimizing JPEG files is a permanent task for you as a photographer, because presenting your work on the web there might be size limitations and you want to limit download sizes on the different client devices. So lets take a look an howto minimize JPEG files with JPEGMini

Nobody wants to download an image with a smartphone with a size of a couple of MB. The user demands the best compromise between size and quality. I already checked out tools like compressor.io and JPEGMini. The results of those tools for reducing the file size were deflating. The advertisement promised a reduction of up to 80% of the original size, but i only got this result if the images were exported at a very high JPEG quality.

Meanwhile  JPEGMini offers a pro version both for Windows and Mac OS at a reduced price of $ 99. Compared to the regular JPEGMini, which is aold for $ 20,–, the pro version includes a Photoshop and Lightroom plugin. With such a plugin you could do your export jobs a lot easier not executing an external program for the file size reduction. But i’m a little bit irritated why on Windows Lightroom is requested in version 5 while version 4 should fit the requirements on MAC OS.

There is a trial version available which asks for an email adress after installation. But with a service like spamgourmet this requirement is fullfilled without having spam mails afterwards. But ater intsallaing the trial version you’ll be disappointed, because there is the regular desktop version installed only. There is no plugin installed for Photoshop or Lightroom ;-(

Just drag and drop the exported JPEG files to the tool and there is an option to store the reduced files in a different folder. 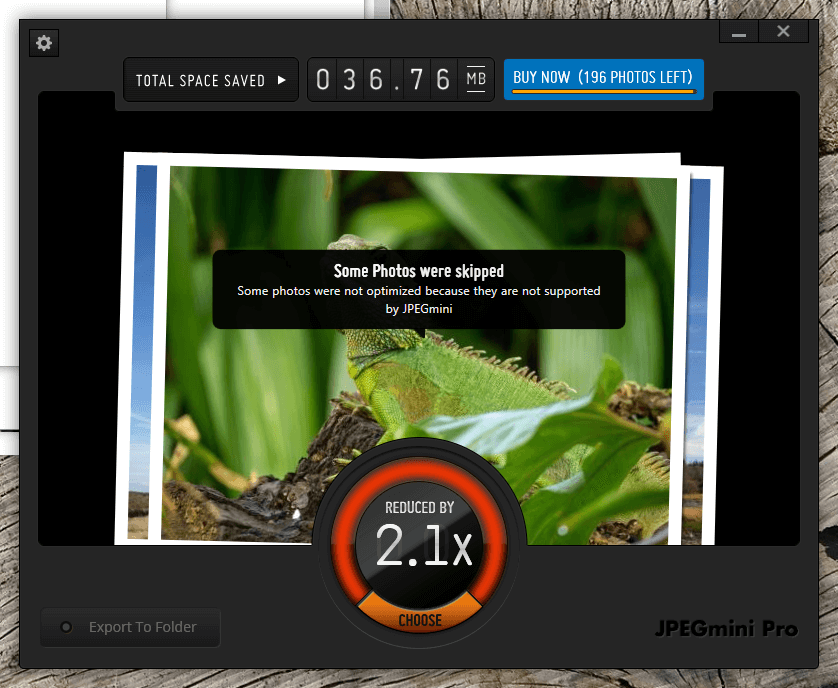 As you might notice on the above screenshot some images were skipped, so this leads us to the results.

I exported 2 different images with JPEG quality settings from  100-40 with Lightroom(files with the ending -2 came from my Lumix, the other image was shot with a  Canon 5D MK II). The export was done at full resolution. And here are the results: 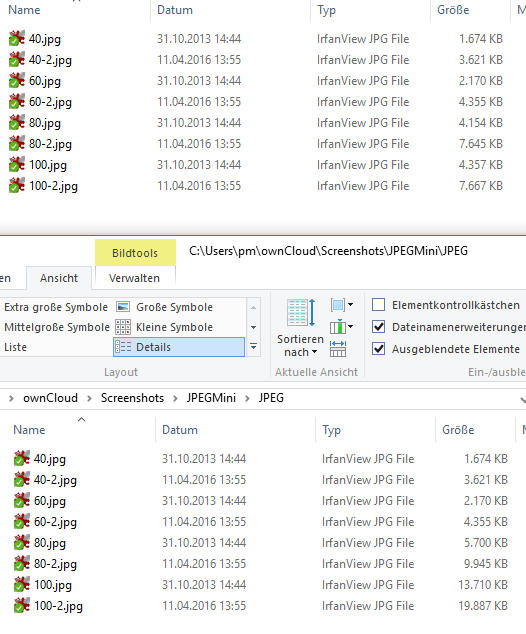 In the above screenshot you’ll see the results of JPEGMini converting the images from the lower screenshot. There you see that the images with a JPEG qualitiy of 60 and 40 arent’t touched by JPEGMini. From the highest to the lowest qualitiy setting JPEGMini reduces the size of the files from 62% down to 23%. Reducing the size by 62% sounds pretty good, but you’ll get almost the same result by exporting the image with a quality setting of 70% in Lightroom.

If you don’t have Lightroom you’ll get the same or even better results by using the free tool  FastStone Image Viewer which was released in version 5.6 shortly. 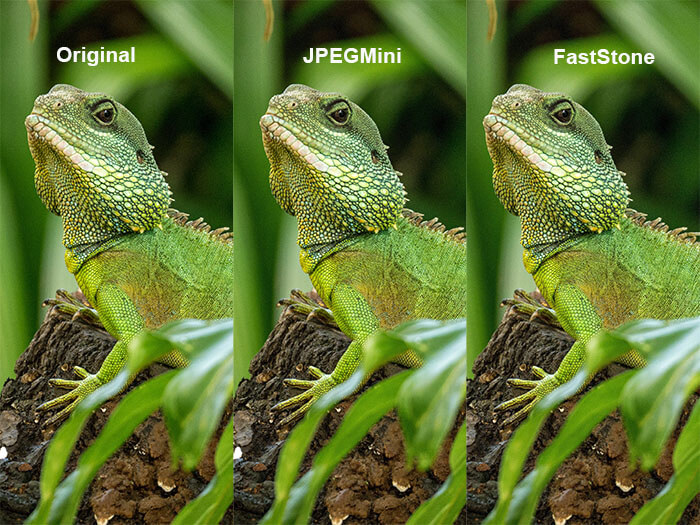 There almost no differences when comparing with the exported images at a 100% quality setting.

The next comparism takes the image exported with a 70% setting and the resulting images from JPEGMini and Faststone which were mae from the 100% image. This comparism is not really fair, because the image from Fatsstone still is smaller than the JPEGMini result  (JPEGMini 7667 KB/Faststone 4.096 KB) 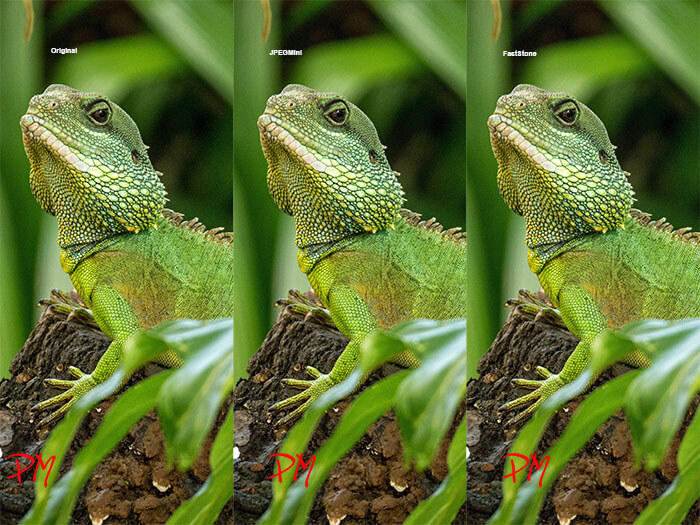 The promised reductions in size weren’t reached in this comparism. The reduction in file size with the free tool Faststone is a lot better. And working without any tools you’ll get almost the same sizes with Lightroom setting the image qualitiy to 70%, which ought to be enough for web presentation. In this comaprism all images were exported in full resolution, while you probably export your images for flickr,Google+ or facebook with a size of arround 2000px only.

Calling a regular price of $ 149 for this tool is a nerve. And not offering a full featured trial version including the plugin for Lightroom/Photoshop is the same, since you cannot test your workflow. If the $ 99 won’t hurt you, just buy it  😉

But reading the blog post about JPEGMini the seriuosly meant question is who uses such a tool? I’m looking forward to your comments and your questions.