Just in this moment my tablet tells me that Lightroom Mobile 2.01 is available via Google Play App store 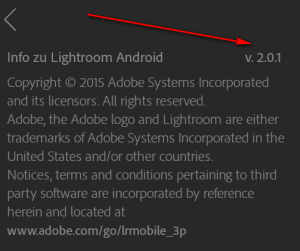 After version 2.0 was released just shortly ago, i’ll guess this is only a bug fix reelase since a lot of users reported stability problems on some functions and/or devices.

Looking through the functions i can’t anything new and since an anoouncement on Adobe’s blog isn’t available yet it’s hard to tell what is changed in this version. Hopefully Adobe doesn’t draw back this version again like the last time.

As soon as a changelog is available i’ll update.

There are some errors in the interaction with Adobe Premiere Clip too but i’ll gues Adobe didn’t correct those errors.

There still is no blog post for version 2.01, but Adobe announced the availability of Lightroom 2.2 for iOS systems.

Just a minute ago my smartphone is downloading version 2.02 of Lightroom Mobile app, but there is no blog post from Adobe. This is the second update without any officlal statement from Adobe.