My wishes to Adobe for Lightroom CC2016 is an attempt to bring together the most wanted features on Adobe Lightroom, but remember it is my personal wish list. 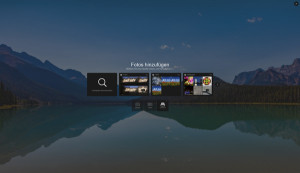 A better communication can be easily achieved by introducing RC version again, like it was usual in the past. You could install the RC version besides a regular version an dbeing able to test out new functions on a very large number of devices with different operating systems and hardware. Ths way Adobe could have testest out the new version before running into severe stability problems on a couple of hardware systems.

Over the years there is a lot of criticism why Lightroom is not multi-user able, meaning don’t being able to have 2 people working on the same catalog which is stored on a NAS or working with smart-previews. The main reason for this is the used database  SQLite, which is not mulit-user or network capable and the database can’t use transactions. But if routines and classes are programed in a clean way, there should be no problem to use another database. The only critical moment is 2 users working on the same image or adding keywords. to an image. Maybe as a first step thsi could be solved to disable editing funtions for a second user, if a user is another user is already editing an image. This would lead into another problem because the second user wouldn’t even be able to export an image, because Lightroom stores all information about an export into the database.

Needing more than 2 users would lead into a license problem, because right now Adobe allows the installation on 2 different computers only. But this problem should be solveable, like offering reduced licenses for the third and more computers. 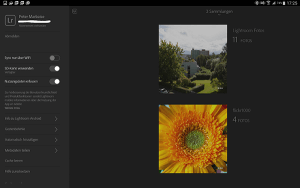 But even adding multi-user capabilities wouldn’t solve another problem in my opinion, keeping 2 catalogs or at least parts in sync. I’m sure that most users keep the main catalog on a desktop pc and another catalog on a laptop, to process image on vacation or add keywords to the images. As described in my article you can export parts of a catalog to another device and import it there, but this is sort of cumbersome. But Lightroom already carries the needed tool for this problem. I’m talking about Lightroom mobile. Keep in mind that it doesn’t have to sync the whole catalog, only a couple of colleciosn would be enough 😉 But til now Adobe allows only one catalog or parts of it to part of Lightroom mobile. It wouldn’t be that complicated to have a catalog meaning only a couple of collections on a laptop kept in sync and another on your desktop pc. . If i convert a raw file to DNG on a tablet add it to a collection on Lightroom mobile it will be correctly added on the main catalog on Lightroom.

In generell shoul work on the main performance of Lightroom. Even though i defined a cache with 20GB size on a SSD it takes quite a while until an image is displayed sharp at full resolution. Even worth on big panoramas, which were stitched a minute ago. Displaying those images at 1:1 it takes a couple of seconds til they are display in full sharpness, so there is the questions why did i define a cache. 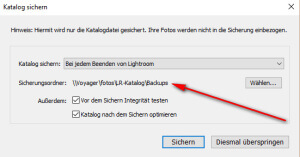 Very positive is the option to backup a catalog from within Lightroom to a different drive like a NAS or USB drive every time you exit Lightroom. Since Lightroom 6 this backup is zipped but takes quite a while to finish. Concerning todays harddrive capacities the question if this option to zip the catalog does make sense or was implmented to late. At least Adobe should have implement an option to do the backup without zipping the catalog. But the catalog isn’t the only file to backup, you need to backup your images and all the presets and preferences which usually are located in  APP/Roaming/Adobe/Lightroom.

Talking about backups there is one question left, should Lightroom provide an option doing backups including the images? Personally i found my way to do backups, but considering the large number of questions to this topic and that the images can stored on all places of a harddrive or more than one harddrives and handling of smart previews the anwser should be yes. 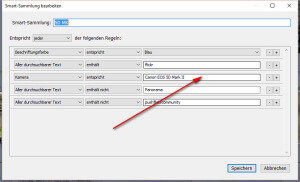 Defining a smart collection which has as part of the definition the used, like cameras or lenses, should offer a drop-down list to the user, since Lightroom knows all used cameras and lenses because of the exif-data.

But defining smart collections there is another feature missing. In the definition you can choose either if all the conditions fit, or only one or no one at all. But there is no definition to setup a logical or relationship. For exmaple you want to find all images with the keyword “Landscape“, are marked with at least 3 stars and taken with the 16-35mm or the 24-70/4.0 lens. The later one ould be solved by surrounding the 2 lens parameters by parenthesis, but at the moment this is not possible.
Update

By chance i recognized that the  ‘+’  symbol to add more conditions will change to ‘#’ by pressing the Alt -key. With this option it is possible to define a parenthesis arround conditions where only one conditions has to be true.

Bookmarks are on the feature request list for a long time. Lightroom by default knows the last selected image, but sometimes in combination with stacks this will lead into problems. Take a look on the little video to see this problem:

To solve this problem and make handling more convinient a bookmark function should be implmented.

Lightroom of course is a very good raw converter but too me there are modules and functions which are not essential to a raw converter. First i want to mention the web gallery function. Most of us present their images in galleries  which are included in systems WordPress, Joomla or similar or are available as a plugin.

And i’m sure most users would get over it if the slide show and fotobook option weren’t available anymore, because there surely more specialized programs for these purposes.

Too Adobe should avoid to implement special functions like panorama and HDR and catch with the competitors like PTGui,Photomatix or SNS-HDR. Talking about single rowed panoramas there are free of charge alternatives like  ICE or the open source tool  Hugin. I reported on those tools here in the blog. On sphere panorams there is no option to get rid of the tripod. For this you’ll need either Photoshop or you make it vanish by adding an additional nadir shot in combination with PTGui/Hugin, which give you better results.

But even worth is the face recognition added in Lightroom 6. Even running in the background the function puts load on the system and as already reported the function is not very reliable, since it recognizes a pattern on a butterfly as a face.

There is quite a lot to do for Adobe to really improve Lightroom before releasing a Lightroom7/CC2016.1 and a couple of features are on the list for quite some time. What do think about or maybe better you have a proposal for another improvement. I’m looking forward to your comments.