Last week review 03-2016 and the weather keeps playing mad, starting pretty cold at the beginning of the week and now you almost like being in spring again 😉 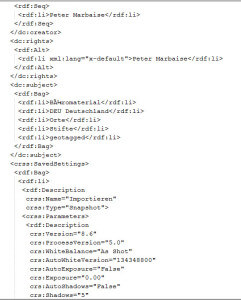 But besides the weather in the article for this week we took a look on the Lightroom catalog and the opportunities to optimize this catalog. The catalog is based on the  SQLite database which is not network capable. But the problem isn’t the database rather the implementation and structure of the database used within Lightroom. Lightroom stores every export in the database which too me is quite needless, except you installed a plugin which does a snapshot on every export. Otherwise on real development changes to the images should be stored in the database, but an export isn’t changeing the image in any way..

Another cuase for the size of the Lightroom catalog is that Lightroom stores stores the XML structure form the XMP-Files in full text in the database without storing repeating entries only once and refer to them with an database id.

I can’T figure out why Adobe does this, probably it makes programming a little bit easier and mybe Adobe thinks that a couple of hundred MB of size wouldn’t bother with todays drive sizes, even if you use a SSD drive for your catalog. Another event showed up in almost every media, WhatsApp is free now. I’m not a heavy WhatsApp user and the 0,89 € don’t hurt, but the decision was right. By now most of the WhatsApp users should have recieved a notification which informs about this changes officially.

This week a consumer organisation form the Netherlands announced to sue Samsung because of its update policy. This is the right way because it is not comprehensible why a relativly new smartphone like my Samsung S6 still runs Android 5 and not being updated to Android 6 aka Marshmellow. Other devices a little bit older lets say 1 1/2  years won’t even get an update at all. This lets manufacturers like Motorola look pretty godd, because they install a pretty clean Android system without any add-ons to their smartphones and these smartphones were allready updated to Android 6.

This week the Cloud updater announces an update for Photoshop CC. On Adobe Blog you’ll find one sentence only, saying that this updates corrects errors from the former version, but no detailed informations.