Last week review 16/2015 and we had at least 1-2 days with almost summer like weather, which made a lot of fun.

This week  [post id=728]mFT[/post] was a topic again, and i’ll took a closer look on the [post id=866]noise[/post] such a little camera will produce. This is getting to know  the little camera Lumix G6 which is probably used mainly on nice days, getting the camera to its limits.

Since the little camera has even a smaller sensor compared to a Canon 7D it was likely to produce moire noise on the images. This is perfectly true for hooting with higher ISO settings, but this was clear when buying the camera.

In a maybe not very fair comparism between the Canon 5D MK II and the Canon 7D the little Lumix G6 did a pretty good job. As expected the difference to a Canon 7D is roughly one exposure value and compared to a Canon 5D MK II there is another exposure value difference. But you must consider the smallness and the little [post id=813]weight[/post] of a Lumix equipment compared to a Canon. This would result in a ISO limit of 800 for the Lumix G6 and would lead into the discussion taken an image with higher ISO settings and accept it or limit yourself to an ideal value and not take the picture. I’ll prefer the first alternative. But image noise depends on the theme and don’t forget we compare the noise looking at 100% views of a crop. If you take a picture to hang it on a wall you won’t take a look that close. 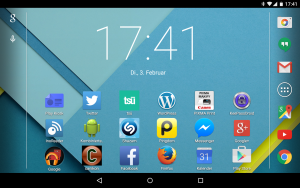 Apparently there were a couple of problems with Android [post id=809]Lolipop[/post] update on the Nexus 7 2013 in both the LTE and the WiFi version.

Finally the Photoshop Guru Scott Kelby announced a big secret to be lifted next tuesday on his homepage lightroomkillertipps.com .  I don’t assume that this will have anything to do with Lightroom 6, because Adobe didn’t state anything so far and a public beta phase is still missing. Til know nobody knows for sure if there will a Lightroom 6 or a Lightroom CC announced.

I hope that some of the articles on this blog gained your interests and i look ahead to your comments/suggestions. And don’t forget, i installed a feed for you via feedburner .