Compared to the software products to generate HDR like Photomatix oder Photoshop, for which you have to pay for, there is an (almost) free alternative, the LR Enfuse Plugin for Lightroom.

Meanwhile there are quite a few tools available, to generate a HDR from a bracketing series of images. Besides of Photomatix, i compared their version 5.0 against the free of charge tool SNS-HDR, there are to mention Photoshop and Luminance.

As an additional alternative i took a look at the LR/Enfuse Plugin for Lightroom, which is donationware, which means the developer expects a donation. You are able to test the plugin without registration, but output is limited to images sized 500px on the longest edge.

After downloading the zip-file extract its contents to the plugin folder of your Lightroom installation and activate the plugin in the modulmanager.

Ok but since a video explains a lot better than thousends of words, take a look at the screencast 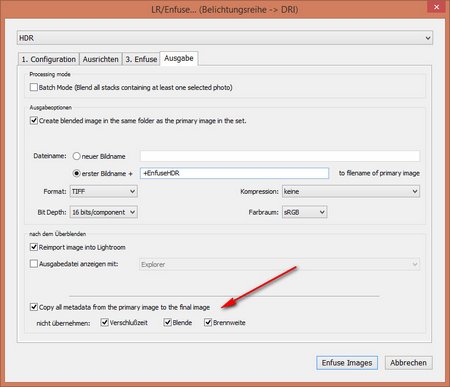 The default settings for the plugin will disable the meta data f-stop,shutterspeed and focallength from being copied to the HDR-image. While f-stop and shutterspeed is sort of reasonable, excluding the focallength is not, or do you take a bracketing series for HDR with different focal length settings?

At least you can enable copying those meta data. A little defect in my opinion is the fact that GPS meta data are not copied to the resulting image, even though the plugin comes with its own own version of exiftool, which is capable to transfer this meta data, too. This results in copying the GPS meta data manually to the image, which is not necessary.

The images generate with the plugin are of high qualtity, and the differences to other tools are negligible. For all of these tools i advice to optimize the source images to gain better qualitiy in the resulting images. To be fair i must note that since Lightroom version 4 with the porcess version 2012 the technical capabilites to develop the source images and the resulting image improved a lot, especially in terms of shadows and lights.

Comparing speed the plugin is on the same level as SNS-HDR Lite, which i use very often.

With the exception of the mentioned problem with GPS meta data the LR/Enfuse plugin for Lightroom is a recommendable tool to generate HDR images.

Did you make alike expierences. Just leave your comments/suggestions and naturally questions are welcome too.