System Tray for the DJI Mavic offers the use of the built-in Gimbal of the drone in regular video capturing, but does it work?

DJI Mavic features a gimbal where the camera or the lens is mounted on, which compensates movements of the drone. So why not use this feature for regular video capturing to compensate movements like walking or climbing.

There a re a couple of gears like this, probably the most knwon one is the  Polarpro Kantara, which costs arround  65 ,– € . I tried out a Kantara clone for less than 20,– € from Amazon.

The delivery was fast so i could make the first test. The system tray consists of a holding for the drone, one for a smartphone and the two handles. Assembled this looks like this: 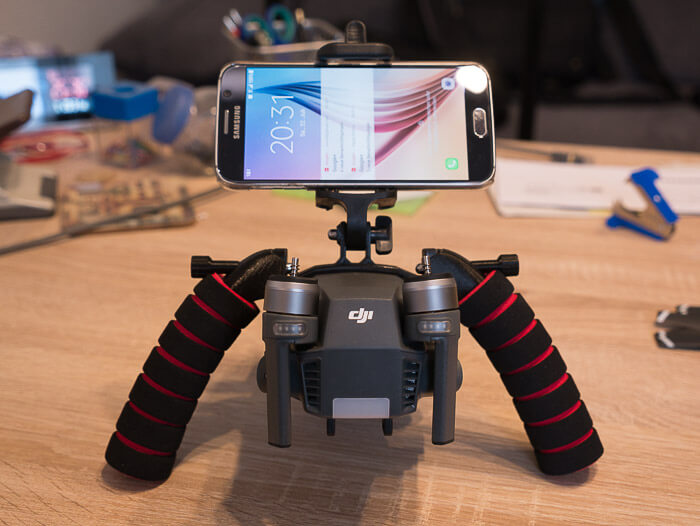 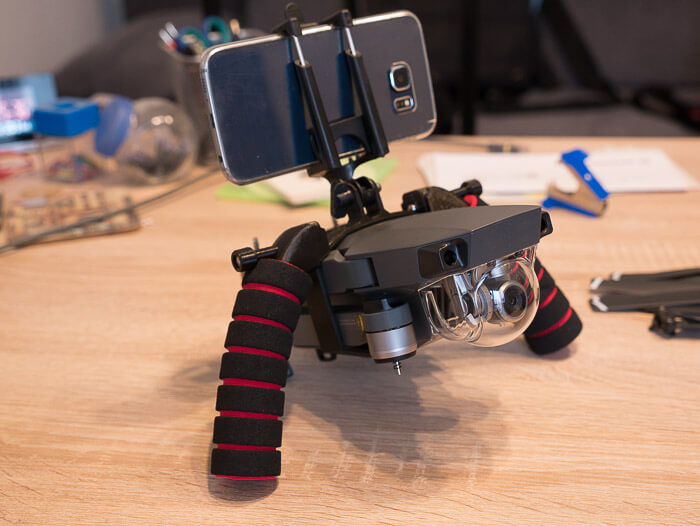 Mounting the system tray needs a little bit patience, but i made it 😉 But you’ll see the main disadvante of this system on the picture, you must unmount the props, otherwise the holder for drone won’t fit.

Since there is no place for the regular DJI remote control a connection with your smartphone is done via WiFi. The DJI App i able to scan the QR code with the required informations to connectwith a network called  Mavic-XXXXX. It was the first time for me to connect to the drone via WiFi . After the connection is established the control goes over to the app. 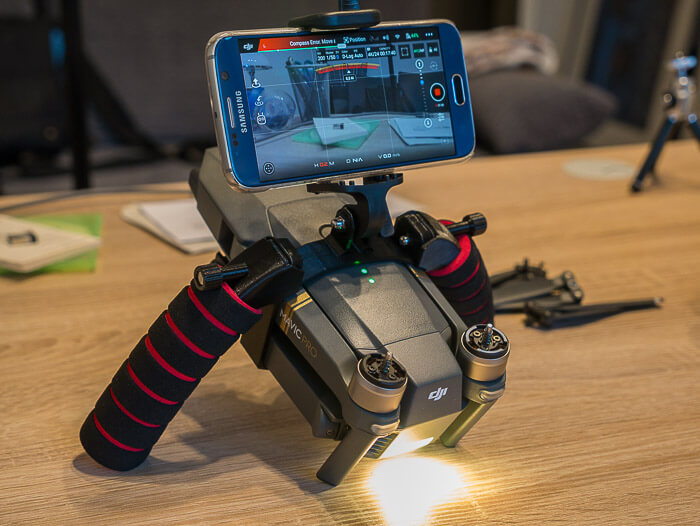 Compared to the display while using the regula remote control the display is flickering pretty heavy. And another thing it doens’t matter how tight you do the screw on the smartphone holder, it won’t keep the phone in the position tilting to the front of the drone. But this is a problem reported for the Kantara tray as well, and this one is 3 times as expensive.

The results you get using the DJI Mavic Pro for regular video capturing look pretty good:

Because of the small sensor of the DJI Mavic Pro you might think about using your smartphone for these captures, and there are gimbals available for these devices starting at arround 80,– €. But most smartphones can’t alter the parameters for video capture or apply a flat profile like D-Log in the DJI.. On the other hand, using a flat profile for your video clips enforces psot processing.

The system tray works pretty gut, but mounting it is very cumbersome, because you have to detach the props. In addition the holder for the smartphone doesn’t a safety hold for the device. And you have to remember to switch from RC to WiFi mode before mounting the tray, if you forget it it all starts all over again 😉 because if the legs of the drone are collapsed to can’t reach the button.

OK for less than 20,– € there is nothing wrong with it, but it is a solution with many odds. But i’m sort of happy that the 3-times expensive competitor Kantara suffers the same problems.