In this article we’ll check out, how the new features in Lightroom 6 should be judged, even though this depends very much on your workflow and your priorities.

After a lot of rumors in the last couple of weeks Lightroom 6 was finally released last week. In a first article we talked about my first [post id=949]impressions[/post] mainly on those functions,  which i’m interested in, and that is HDR and panorama. I must admit that i didn’t count on a final release last week because of the missing public beta phase.

And the first problems show up in form of not being able to activate the GPU acceleration or the the numbers normaly besides of a ruler are not visible.

But since the official release on april 21st i had a little bit time to check out a couple of things.

Comparing the versions Adobe itsself places the GPU acceleration almost towards the end of the description. The hardware requirements the graphic should support OpenGL 3.3 or higher and have at least 1 GB of VRAM.

I didn’t have any problems activating the GPU acceleration on my laptop, which runs a NVidia GT750M with 4 GB  of VRAm, or on my desktop pc, which is a GTX650 with 2 GB VRAM.

I really would like to show you the usage of the GPU in a screencast, but producing a screencast the screencast software would use the graphic  card 😉

I can describe the effect as with using such a graphic card with Adobe Premiere Pro or After Effects, there is no ‘Wow’ effect in terms of gain in speed. Using a tool to display the usage of the graphic card you’ll see that the card is used like on local corrections, but there is significant gain in speed.

This function is implemented pretty good and leads you to very neutral HDR images. I made an example of 3 images, merged together with Lightroom 6, the Photomatix plugin and SNS-HDR.

But the HDR function is to me no reason for an update to Lightroom 6, because you’ll get results of the same quality with SNS-HDR an this  [post id=292]plugin[/post] , even though this solution is a little bit slower. 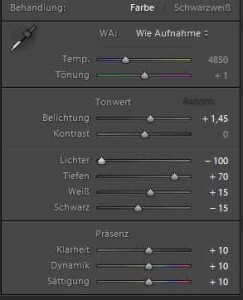 Noticeable is the act that the image merged with the Photomatix plugin is pretty dark by default. But you can increase the exposure and bring the lights down. Lightroom 6 sort does this with its own image by default, as you can see on the screenshot display the rulers for exposure and lights. Depending on your images Lightroom 6 adjusts the exposure somewhere between 1,5-2 EV.

What is too bad to me that almost no image processing respected by the new HDR function. Adobe states in an article, that it doesn’t make sense to process the base images before the HDR merging process, because settings like exposure, lights and shadows will not be respected in the merging process. Depending on the theme and the base images it can be worth it to [post id=655]optimize[/post] the images before merging them with an HDR tool.

In the allready mentioned article [post id=949]Lightroom 6 is finaly released[/post] i shortly introduced the panorama function in the short video. The function itsself works out pretty well on single row panoramas.

I do quite a lot of sphere panoramas using a fisheye zooms because i only need 4 images to cover the full scene. I tried to merge such an image with Lightroom 6 , but as you see  in the video this doesn’t work out. Maybe can’t handle images taken with a fisheye.

Another way to tkae the base images for a sphere panorama is the use of a nodal point adapter with a ulta wide angle, like the 17-40/4.0 L in commbination with a Canon 5D MK II.  To achieve this i shoot 8 images on the horizontal setting and another 4 images on each +/- 50° setting. Another nadir shot is taken to vansih the [post id=335]tripod[/post] in the later processing. This can be done with either PTGui or Hugin

I tried this with the new Lightroom 6 function:

As you can see in this example Lightroom has done a pretty good job stitching the panorama, of course you can see the tripod at the bottom edge of the image. Since merging these base images take at a focal length of 17mm i really suppose that Lightroom has problems with the fisheye perspective.

If i add the nadir shot to the the images to be merged Lightroom 6 quits with an error message that the images can’t be merged. With the above result i’m confronted with the problem to call Photoshop retouching the tripod, which should be quite some work because of the underground.  In PTGui i’ll take the nadir image and add this with the viewpoint correction to the project and there is no need for retouching the final image.

In the above example Lightroom 6 shows a preview of the panorama after 44 seconds, but merging the final image Lightroom takes 8:12 minutes. This is quite slow, very slow  because compared to this result taking PTGui presents the final image áfter a little more than 2 minutes including a 16-Bit Tiff export for the base images.

It is quite obvious that Lightroom 6 implemented a limit for the maximum base images for merging to a panorama, which seems to be 100 images. I tried to merge images which i shot with the Canon 100-400/4.5-5.6 at a focal length of 400mm, which contains 169 base images. If i try to select more than 100 images Lightroom 6 quits with an error message or the the megre function is not selectable.

As a first conclusion i can state that the panorama function is implmented good, but there are problems with base images taken with a fisheye lens and that the function is quite slow. If you are interested in sphere panoramas covering 360°x180° you should go for another software like PTGui or Hugin, if you prefer an open source solution.

Ok that is enough for the first part. In part II we’ll take a look on the new face recognition and other improvements.

What do you think about the new functions implmentented in Lightroom 6? Is it enthusiasm or disillusion? Let me know in the comments and ask questions.