Last week review 37/2014 and autumn is coming, but also the Photokina is on it’s way. 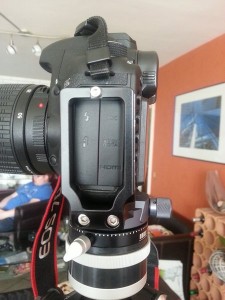 In this weeks [post id=597]article[/post] i had a look on a very cheap L-Bracket from Gump, which is sold for arround 20,– €. The bracket is a universal bracket, there are no specified brackets for the different camera modells, as you probably know from manufacters like Kirk or RSS.

This is the main disadvantage about this L-Bracket, because depending on your camera modell it might happen, that the connectors for USB or cable release are not reachable, when the bracket is mounted. So you’ll have to check the dimensions of your camera.

When mounted on my Canon 7D i know for sure running into problems when using the camera in portrait mode, since there are no cut outs in the L-bracket for a cable release.

But the most important event should be the Photokina in Cologne. Many manufactures have allready announced new products or they got leaked. Talking about Canon according to this article their should be a 24mm/2.8 Pancake, a new 24-105 with STM foccusing ( a new 400mm lens should also be announced). With the  new 24-105 Canon takes the video people back into the Canon community.