In my tether article series i already made an article on [post id=53]DSLRDashboard[/post] DSLRDashboard is an app for Android smartphone and tablets, like the [post id=60]Nexus 7 2013[/post], which i use mainly for tether shooting.

The changelog for DSLRBoard states a fix for the problem with AF focus point in Liveview with Canon cams in the newest version 0.30.33. I already reported this problem in my article.

Since this is the main point of criticism, since this bug makes it impossible to use the app for focus stacking sessions, since you have to point the AF point anywhere on the screen. So i’ll gave it new try. 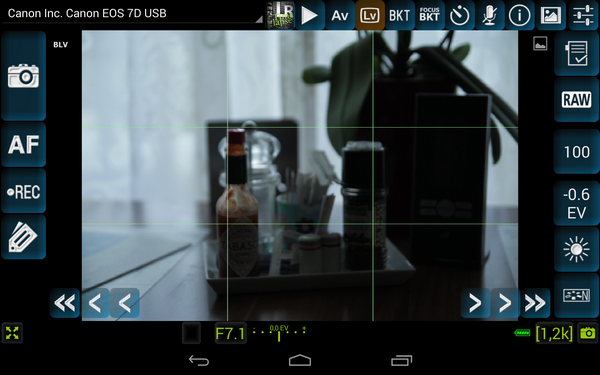 The newest version was already installed with the update function, so i setup the camera and tried it again.

But to shorten it up, both on the Canon 5D MK II and the Canon 7D there is no AF point in Lifeview, which can be freely positioned on the screen. You can focus by pushing the AF button, but the focus cannot be positioned out of the center of the image.

I couldn’t firgure out the cause of the problem, even a search on XDADeveloper didn’t bring any solution. The app itsself make a good impression, both DSLRDashboard and Canon cameras won’t get friends.

This is too bad so i’ll stick to DSLRController , an app which works almost perfectly with both cameras. I use it with the Nexus 7 2013 and a S3 smartphone.

Do you have any problems with DSLRDashboard and Canon cameras or does the app work with newer camera modells? I’m looking forward to your comments and questions.