You are alomst frightning to death, then slowly rising anger and desperation, if you formatted the memory card by accident not having saved the images on this card. I guess this happens to everybody sometimes. The you need a data retrievel on formatted memory cards.

It happens to me a couple of days ago, so never say no 😉 The about 20-25 shots were not that valueable, expecting the worst case i could hhave made these pictures again, but it is pretty frustating. But it it happens try to keep calm and first step is to remove the memory card from ther camera.

Allmost every filesystem dont’t delete files physically or even overwrite them, only the files meta data and the link to first data block is deleted. The data block itsself is not deleted, but marked as free in the file allocation table. This is the reason why every writing operation to the volume must be prevented.

Formating a volume almost results in the same, only the file allocation table is newly written.

Both deleting and the formating of a volume offer the possibilities to retrieve the data again, because the images on the memory card (just like other media like hard disks or sticks) are overwritten physically.

The rescuer in such caes is named Photorec, which is available in version 6.14 for almost any operating system, like Windows, Linux and Mac OS.

After the download extract the zip file and photorec can be started, but be aware there is no gui, but it is easy to handle. 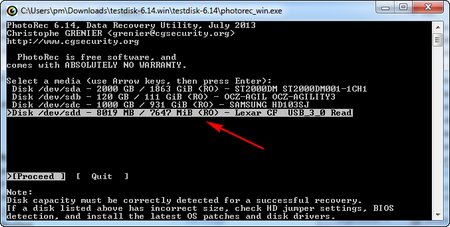 If you happen to setup a linux system, you feel at home, because the volume names are well known. We choose the memery card from our card reader, which was formatted accidentaly in the camera. 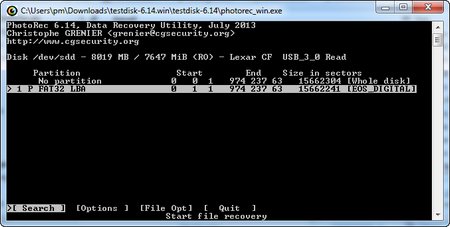 Next we choose the appropriate partition on the media.

As a rule memory cards only contain one partition, while larger sized sticks and even more usb hard disks can contain more than on epartition. 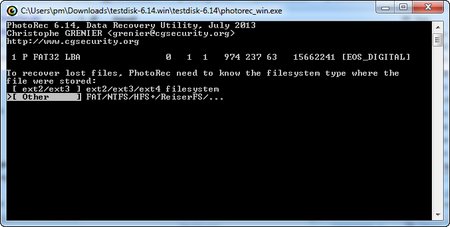 Last we have to tell photorec which file system we are dealing with.

The default entries from photorec usually are ok, so you only need to confirm the selection. 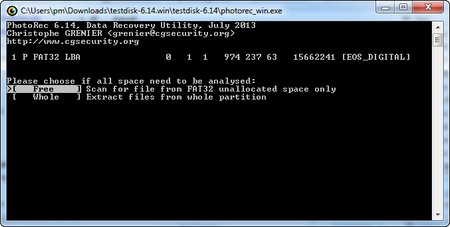 If only some files are deleted, search can be accelerated by entering the name, possibly with widlcards, especially on larger volumes, since photorec only searches the marked free space on a media.

Loosing files due to a crash of the operating system i would choose the whole option, because it is not save the file allocation table was written correctly to the media. 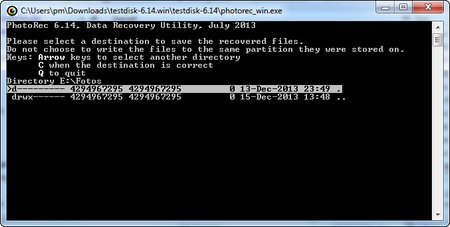 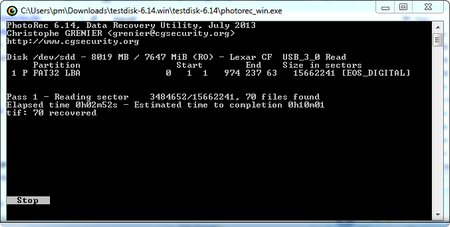 Photorec now searches the volume and saves every file found to the given directory. Interesting enough that Canon’s .cr2 files are recognized as tiff files 😉

After running the tool, the directory e:\fotos\recup_dir where all deleted files found are saved to looks like this.

The file extension .cr2 is kept, but as already described the original filename is not present any more, so photorec names the files on its own.

Photorec is of course a first call data retrival tool. In the examplke above photorec retrieved also very old images from the memory card, which were already imported into Lightroom.

Did it happen to you accidently formating your memory card in the camera und how did you retrieve the images? Just leave your comments and/or suggestions and your questions.