Since almost everyone owns a Smartphone or a tablet, its sort of natural to use such a device for phtographic purposes. I would like to introduce the apps, which i use on my smartphone or the nexus 7 2013 tablet.

As indicated in the title, we are talking about Android apps only, iPhone or IPad apps are not covered i this article because i dont own an apple device.

The mostly used tool to me is DSLRController, which i already described in the article here (sorry german ;-))

The first simple and free tool for Android systems is Blue Hour. The app determines based on the location the time of sunrise and sunset and the time of the so called Blue Hour. This can be used to either do long-time exposures or fascenation timelapse videos.

The first simple and free tool is Blue Hour

The app determines the basis of location , the time of sunrise and sunset and the time of the so-called Blue Hour. This can be used for long-time exposures, where the sky is not black, but a least shows some details. Another situation is planing a timelapse sequence from dawn to the end of the blue hour. 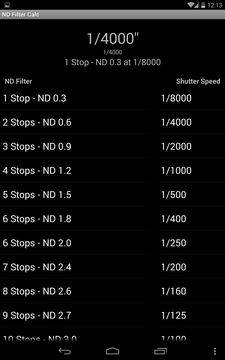 The next app on the list is ND filter calc, which is also free. The app calculates the new exposure time based on the measured by the camera an the selection of the appropriate ND filter If we use a B & W 1000x or HiTech Bigstopper , you have at least one EV, cause these filters tend to expand the exposure time by 11 EV. You have to do thsi manually because the app does not list filters greater than 1000x ND3.0 respectivly

A small and useful tool , because metering with applied filters , these mostly failed, even if one covers the Camera Eyepiece to prevent the intrusive measuring scattered light. 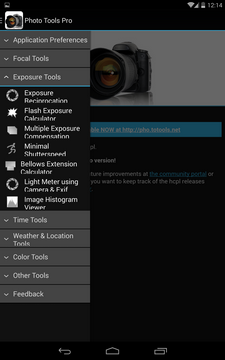 Photo tools is a collection of tools under one app. It includes the calculation of sunrise or sunset depending on the current location. The location is either the GPS location or firgured out through network, the later of course does not have the same accurateness like GPS.

Photo tools also contains a caclualtion of the exposure parameters due to inserted ND filter.

The tool collection also contains a DOF calculator , a time lapse calculator or calculating the angle of view for different lenses and camera formats .

There are a number of other small routines available in this app if you need them all, anf if you buy Photo tools pro you dont need the other 2 apps. 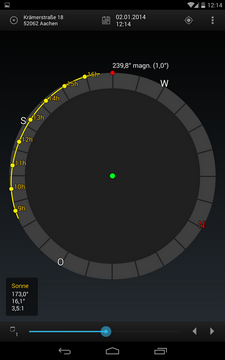 An app that can not be missing in the list of tools , Sun Surveyor is an app that said , depending on location and season simplified representing the sun’s path .

This is extremly usefull for planing foto tours allowing to get to right places in the right time. meaning the sun to be at the optimum angle to a subject (landscape, architecure you name it) or determing taking a picture either on sunrise or sunset.

The site can be found here GPS or network-based, but it can also, and this is certainly important input for planning a foto tour a new location can be entered by name.Of particular interest is the ability not only to be able to select a different location , but also a different date. 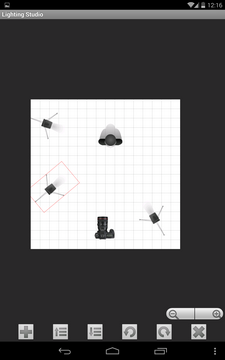 The last app I want to introduce is Lightning Studio , which is offered free of charge.

With this app you can quite easily documented exposure situation in the studio, and is also useful when one does not have a studio flash system , but system flashes are used.

The finished drawing is then saved in PNG format and can then be shared the usual function. While nothing earth shattering , but a useful app .

So I introduced the apps I use . Naturally PhotoTools can replace the other two, blue hour and ND filter Calc, so you need only PhotoTools and Sun Surveyor .

What apps have you installed that support you in the field of photography . Just leave me your comments / suggestions and any questions .