For a little over three weeks now I own an Acer Aspire V5-573G and want to report the first experiences that I have made with the device.

Shortly before Christmas 27 months old Dell Vostro 3350  made booboo , although worked flawlessly two days before. A helpful person from the Dell forum diagnosed motherboard damage , and repair costs only for the spare aprt would exceed about 250 , – € ;-(

New selection of a notebook was made , and with my available budget the Dell 3560 and Acer were the 2 notebooks to choose from. Decisive for the Acer was the practically the same price, although already had 8 GB RAM installed , and the fact that it allows , in addition to built-in hard disk to install a mSATA SSD, which can then serve as a boot drive.

The differences between the two models are quite low , but then also fell due to the positive reviews on the net the choice on the Acer , but this time with a warranty extension to 4 years 😉

The laptop is a 15 ” unit , but with a resolution of 1920x1080px , which certainly compared to the usual resolution of 1368x768px is an advantage in the processing of photos with Lightroom. The display is dull and as far as I could find until now quite bright when it must be .

The Acer does not have a DVD drive, which I did not really miss at the Dell machine I’ve burned throughout the period of use 1 DVD. He is nice and flat , and above all , the surface hardly takes fingerprints. Nevertheless, of course, the points whre you touch the laptop, e.g. to open it up, prints are to be visible after a longer time of usage.

If we may trust the Windows Perfomancs Index , the desktop graphics performance is somewhat less than the Dell, but as long as Premiere Pro and After Effects run smoothly , it doesn’t bother me. Oh and do not forget when comparing , it’s a regular notebook with a 500GB hard drive in it. 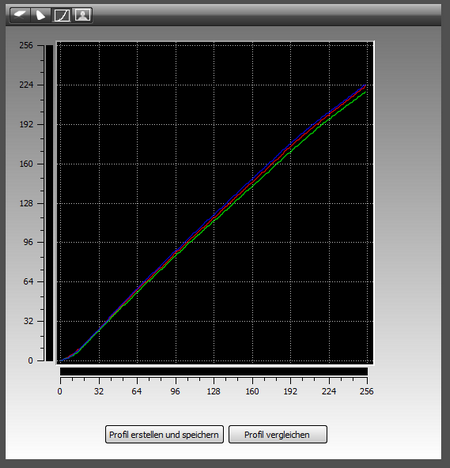 From the display , I ‘m excited for a first calibration with the  X -Rite Display Pro right  , there were practically only differences in brightness over the  factory default settings on the laptop.

Again, the color lines after calibration quite parallel to each other, no difference to the Dell I had before.

It is easy to read , at least in the usual distance for a laptop and the matte finish does add some to make life easier when bright light sources are present. With a test outside in the sunshine I can not serve unfortunately .

First experiments with Lightroom let the Aspire appear more than suitable for photo editing, it is fast enough , despite the fact that he only has a regular HDD .

The Aspire V5 comes with a preinstalled Windows 8 which is ok to mee, since my desktop pc is running Windows 8.1. Needless to say hundreds of updates are downloaded and installed as soon as a internet connection is established.

As i mentioned my desktop pc is already running Windows 8.1 what could be more natural than the laptop upgrade on 8.1. So you going on the recommendation of Acer to upgrade the latop to Windows 8.1 from the windos store,but after the restart the screen remains black and then will run on Windows 8 reset.

Then you search forums and then find it 😉 But both methods , download a Windows 8.1 ISO and the drivers fail to update . The former because the windows serial key is not accepted , and in the second method , it fails again to a black screen .

The Acer Aspire V5 is still a good and stylish notebook , and i don’t have the feeling that it was a mistake , I decided , despite the problems with an update to Windows 8.1 , this time against Dell.

Since i’m spoiled with SSD drives , I now ordered an mSATA SSD. In the second part of this review i’ll report on assembling the SSD drive and cloning Windows 8.0 to the SSD drive.

What is your favorite laptop, matte or glossy display and what experiences did you make.Just leave me your comments / suggestions and questions gladly .