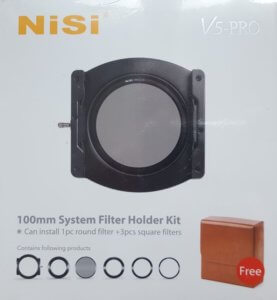 As sort of a preview for the times with better weather this week we took a look on the  NiSi V5 Pro filter holder system, which comes in a box including 3 adapterrings for different filter sizes and a polarizing filter. In the past i used a Lee filter holder for the square filters as neutral density and for graduated filters. Now i used grey filters only and didn’t get any graduated filters.

The quality of the filter holder is very good and with the 3 adapterrings inlcuded in the set you should get along for the most lenses. Only for filter threads smaller than 62mm you have to order smaller adpater rings. The polarizing filter is/has to be very thin and mounting it to the filter holder is nothing for winter time when you wear handkerchiefs. But the combination of neutral denisity and polarizing filter for longer exposure times can lead to fantastic shots.

In the last week review i reported that there is a new lightroom version on its way. According to the informations published by a beta tester there should be an improvement in performance again. Because of the pretty precise report published i assumed the new Lightroom version to arrive this week, but this was a mistake.

And this week a couple of apps for Android were updated most important too me was the update of the Android client for Nextcloud bringing this app to version 3.0.0. This app offers an end-to-end encryption and additional improvements. Most important too me is the fact that a sync is working now. Changeing a picture with the same in the cloud isn’t shown right away probably due to the caching but downloading the newest version is shown.