Wideangel and extreme Wide angel lenses garantee a great depth of field, even if you don’t close the parture that much. This is due to relativly small magnification ratio the capture is taken.

In a blog i read that taking the [post id=606]Canon EF-S 10-18mm/4.5-5.6[/post] at 10mm and an f-stop 5.6 foccusing distance on 1 m there should be a depth of field range to inifinity. Without a prove i wondered how to set the focus distance on 1m, because the lens doesn’t have a distance scale 😉

Taking the first pictures with this lens i gained the impression, that the depth of field at leat concerning the (almost) infinity distance wasn’t right. Therefore i’d tested it out, with an exact measurement of the distance to the subject.

Either DOF-Master or an App on a smartphone or on a tablet all tools calculate the same results, that setting an object distance of 1 m and f 5.6 at 10mm everything between 0,48m and infinity should be sharp.

Taking the comaprism pictures i could’t set the object distance so i measured it from the front lens. And now take a look at the pictures. 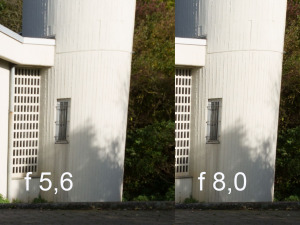 The crop isn’t really sharp at f 5.6 and taken the capture at f 11 only improves it a little bit, but it isn’t sharp. I did a test shot with the same setup and the Canon 5D MK II and the 17-40/4.0 L. According to the DOF calculator i’ll took the capture at f11. Almost the same result and if you take a look at the window you’ll see that iti is not really sharp either.

Now you might say nit every picture is looked at a 100% crop, you view a 50x70cm pictures at a distance measuring the diagonal which is about 85 cm. But too me the blur is to much to work out for bigger prints, if you consider the bushes in the backgound. . If i image a landscape images with a really distanced horizon this doesn’t work out.

But this would mean that DOF tables are at least about one f-stop wrong? Am i too critical? I didn’t recognize this problem by now, since taking picture with extrem wide angle i use an f-stop of at least or f 11, since i use full format cams because of their potential to closethe aparture for ladnscape or architecture captures.

What are your experiences with the DOF-tables? Are they working out for you? Drop a comment or aquestion, i’m looking forward to your comments.