Lightzone is a former commercial project, but it has been relaesed under the rules of the BSD license. The up to date version 4.0 can be downloaded from the projects website. A little bit odd that you have to register first on a opensource project, before a download link is available. Normally downloads of opensource projects are hosted on sorceforge.net or similar websites. 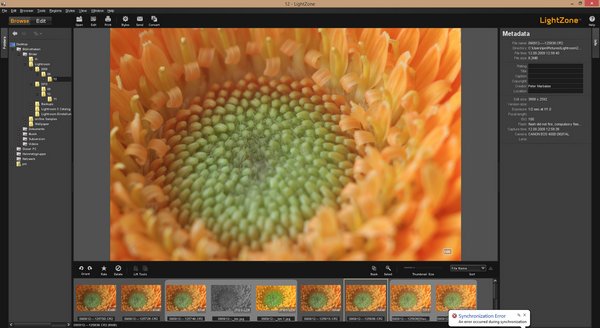 The first abnormality is the time to start the tool, even though i have a SSD installed on my notebook. Ok we can overlook this one, because you start Lightzone only once in a session 😉 The program displays all functions in an ordered manner. On the left hand side we’ll find a file browser, where we can select the image folder.

This is just like in RAWTherapee the main difference to Lightroom, you’ll don’t have to import your images, you start up right away with the image processing.

In the middle there is a light box, where a couple of the images of the selected folder a displayed in a preview. On the right hand side the main exif metadata are listed. 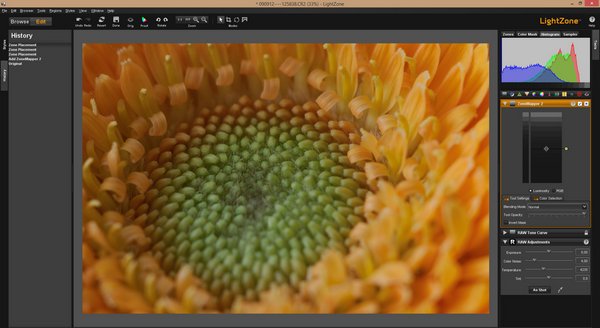 With the different tools on the right hand side you have all the development tools to your disposition you need, like white balance, contrast, hue and so on. A special tool is the relight tool, which reduces the overall contrast and increases the local contrast. Sort of comparable to the HDR tool in RAWTherapee.

Zonemapper is the tool, which tries to implment the Zone system, which original was developed by Ansel Adams in the good old days of analog photography to the digital image processing.

Lightzone is missing tools for lens or perspektive corrections and the support for exif metadata has to be improved.

Export of images can be done in jpg and tif files, the later in 8 or 16 Bit depth.

Lightzone is just like RAWTherapee suitable for getting into raw development and if you want a raw converter offering more tools than Canon DPP. Saving the development steps in a seperate sidecar file can be in RAWTherapee too, but depending on the source file these files sized from 87 KB up 1,7 MB, This is due to the fact the original raw file is converted according to the development steps and saved together with the history in this lzn file. But the Lightzone project should fine a way, to save those informations in a smaller text file.

Besides those little typos Lightzone is a real good raw converter. But you have to find out yourself if the workflow is fitting your kneeds.

What about you, using Lightzone already or another raw converter? I’m looking forward to your comments/suggestions and questions of course.