I remember the times when Canon introduced the 7D modell that shortly after the introduction the camera gained the reputation in blogs and communities to be very noisy. 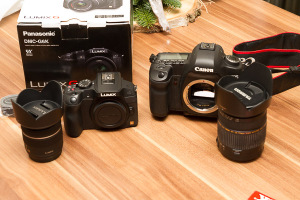 But anyway the Canon 7D is a very camera and talking about noise in the images, it depends on the theme and i got images taken with ISO 3.200 printed on 50x70cm, you won’t guess that they were taken at a pretty high ISO as long as you stick with your nose to the picture.

Noise in images occurs mainly in high ISO shots and is even more visible on small sensors. Applying this logic a Canon 7D with 18 MPix on a APS-C sensor should generate more noise compared to a 5D MK II with 21 MPIx with a full format sensor.

From an earlier comparism i knew that between my 2 Canon cameras there is a difference of 1 EV considering noise, meaning that judging visual the noise on a picture taken with the Canon 5D MK II t ISO 1.600 is almost the same as a Canon 7D capture taken at ISO 800.

Now i was looking forward how my [post id=728]Lumix[/post] would end up in such a comparism. Taking the assumption mentioned above the Lumix G6 should have a worse noise behavior somewhere arround 1 EV, because the sensor is even smaller ( i’ll think the difference between the 18 MPix from the Canon7D and 16 MPix from the Lumix is negligible in practical environment, even though the pixelpitch is relevant at least in theory).

But enough writing, lets go to the comparism (a comaprism not a test)

The images were not processed (no sharpening, no noise reduction) even though i know that using a raw converter like Photoshop/Lightroom there is an interpretation of the raw file, but i’ll think that this has no effect, because you’ll use such a raw converter in real image processesing.

The exposure sequences were taken beginning with ISO 160 at the left and incresing by 1 EV to the right end point at ISO 5.000.

Bit i can state that comapring the noise in the images the Lumix G6 is 1 EV worse compared to the Canon 7D, as expected. This is a good result for this little camera, but i’m wondering about the minimum ISO setting at 160 offered by the camera with the smallest sensor. My wish would be an minimum ISO setting of 100 or even 50 with reduced noise. 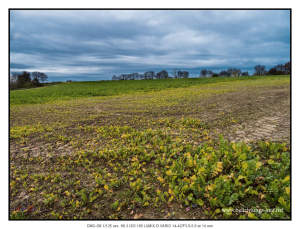 I expected this result, so i’m not disappointed. For practical use we record that we can a lot in terms of noise reduction and detection of noise depends on the theme and on the predominant colors.  If the auto focus systems does a good job, than you don’t have to fear noise in the image even if you plan to print it out on 50x70cm because noise detection depends on the distance you view at the picture.

And sometimes the picture impression gains with a little bit of noise, that’s the reason why we developed the famous TRI-X to ISO 800 or even 1.600 😉

What do you think about these results concerning the noise on the little Lumix G6? Leave your experiences and/or questions in the comments.