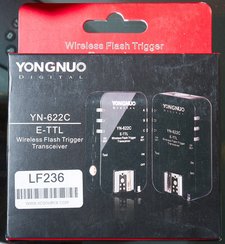 The Yongnuo YN 622C is a flash trigger for Canon systems, which commits the signal in contrast to the Canon ST-E2 via radio on a 2,4 Ghz band. This should avoid some problems with the ST-E2 in bright sunlight, not triggering the flashes dependable.

Radio triggers are arrount on the market for some time, but the Yongnuo YN 622C transmits the E-TTL signals, so you don’t have to miss the comfort metering the flash-exposure even the flash is far away.

The solution offered by Yongnuo is very affordable, since you pay only arround 70,– € for 2 devices, which act as trancievers. 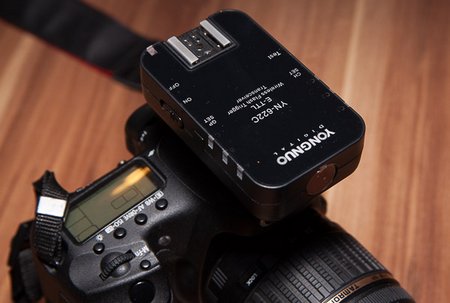 As you can see on the picture, the devices are sort of big, bigger than i imagine they would be

I think the size si due to the fact, that those triggers are powered by 2 regular AA-size batteries. To me this an advantage of these triggers, because AA size batteries are available almost anywhere, although i use eneloop rechargeables, as i already mentioned in the article about the Yongnuo 568 EX II flash unit. 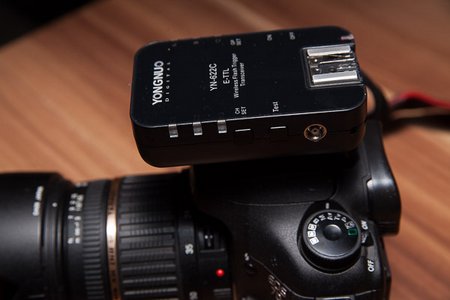 On the right hand site you find the power button and the button to set the flash group. Buttons for changing the channel and to trigger a test release are found oin the left hand site.

Attaching the trigger to the cmaera is done with a knurled screw and the hot shoe is connected through. The trigger also offers a PC-sync connector to trigger studio flashes.

In some reviews about this flash trigger it is crticized that there no option to update the YN 622C via USB. Considering the price i think this is not a fault. Even if they had the oportunity to update it is not certain to work for future cameras, if Canon changes the E-TTL proticol either just technical or for marketing reasons.

Ok insert the batteries … sorry rechargebles setup channel 1 and mounting a YN 568 EX II to it. Powering the device on LED flashes on the left hand side to indicate the channel and likewise on the right hand side for the group. There is also a red standby led. The later one is very bright, too bright to me, doing a shooting in a drak place like a church or something like that.

Taking a couple of test shots with different f-stops, ISO settings and exposure times down to 1/8000 sec. every shot was ok.

Taking no actions on the camera results in a sleep mode for the camera and also the flash depending on the configuration. Awakening is done by a little touch of the shutter relase, which also wkaes up the flash, to me perfect.

Teh Yongnuo YN 622C use a very bright AF light. The size of this AF light was extended according to other reviews. 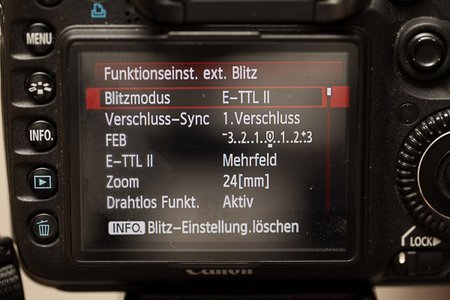 Changing the settings of the flash through the camera menue is very comfortable, you don’t have to go to the flash unit.Even changing changing the flash mode from E-TTL to manual with reducing the performance works without any problems.

Changing the zoom factor of the flash from within the camera menu is possible, too

If you own 2 or more flashes set the groups to A:B and control the ratio of flash exposure between 2 or more flashes (within on group). This gives you the opportunitiy to decide if the left flash only has like 1/4 of the power as the right flash.

Since i was asked, how about the combination triggering a flash with radio and another one with the built master/slave capability?

The radio trigger YN 622C allows the setup of the flashlights in mixed mode, which means one flashlight in ETTL and the other one in manual mode. First you press channel button until it blinks 3 times. Now you can attach a flashlight setup to manual mode. The other flashlight/YN 622c doesn’t need any preperation. 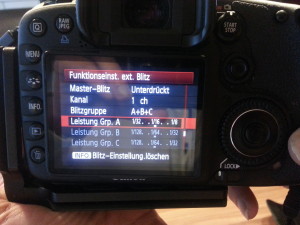 And now the clou, you can control the flashlight, which is operating in manual mode, from the cameras flash menu.

As an example you see the flash menu from the 7D choosed the manual operating flashlight. Now can setup the power for the flashlight in manual mode from the camera. The flash shows up in group A, so i’ll assume that you’re able to setup more than one flash in such a group, but the power can only be controlled for all flashes together in the same group.

To mee these flash triggers are perfect for my work. The only thing left is a test for the maximal distance triggering dependable the flashes. I did trigger the flashes walking to another room 😉

The triggers do what they are supposed to do on both a 5D MK II and a 7D, so i’m glad. I’m thinking about buying another Yongnuo 568 EX II, since i ordered right away 4 of those triggers 😉

I only once had a malfunction, when the Canon 430 EX I switched to TTL and not E-TTL, but besides of this one effect the combination of the triggers and the flashes works dependable.

The only not really negative thing is handling the triggers, it sometimes happens you accidental change the channel or the group for the flashes, because the buttons are aligned on the sides of the triggers.

Wich experieneces do you hvae with flash triggers or are you using other triggers. Just leave a comment/suggestion and questions are welcome, too.